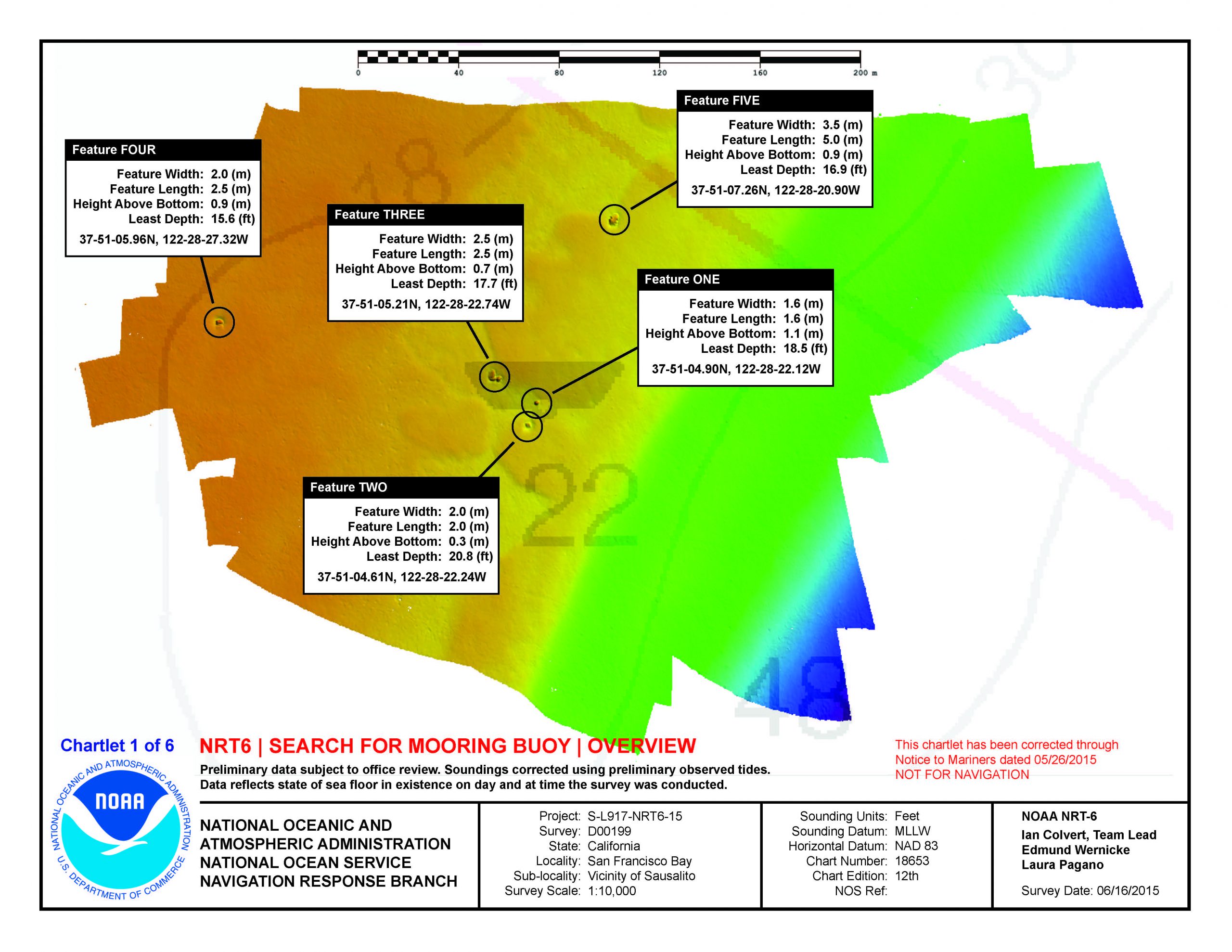 Coast Survey’s Navigation Response Team (NRT) 6 responded to a request from the U.S. Coast Guard to locate and facilitate recovery of a sunken mooring buoy near Sausalito, California.
Although not a threat to surface navigation, there are two reasons for this recovery effort. The first is to protect mariners from getting their anchors caught on the buoy or tangled in the mooring chain. Recovery will also allow the U.S. Coast Guard to repair and possibly reuse the buoy.
END_OF_DOCUMENT_TOKEN_TO_BE_REPLACED

Sunday, June 21, was World Hydrography Day, a day set aside to recognize the important work of hydrographers.  Measuring and describing the physical features of oceans, seas, and coastal areas is essential not only to the safe navigation of the everyday mariner, but to our nation’s economic development, security and defense, scientific research, and environmental protection.


This year’s observation was particularly noteworthy for NOAA, as we honored the lost crew members of the U.S. Coast Survey Steamer Robert J. Walker, by dedicating a memorial at the Absecon Lighthouse in New Jersey.
On June 21, 1860, the Robert J. Walker was hit by a commercial schooner while transiting from Norfolk to New York after months of surveying in the Gulf of Mexico. The ship sank 12 miles offshore, as they were heading to the Absecon Lighthouse after they were hit. Coast Survey lost twenty crew members that night, and another man died from his injuries the next day, in the largest single loss of life in Coast Survey and NOAA history.
END_OF_DOCUMENT_TOKEN_TO_BE_REPLACED

Well before the invention of the computer and the following onslaught of digital data, S.R. Ranganathan in his 1939 book, “Theory of Library Catalogue,” described in detail how a library catalog should work and be prepared. Since then, the way we develop and maintain information databases and archives has dramatically changed. The format has morphed beyond traditional books and journals to large amounts of digital data.
The Office of Coast Survey alone produces digital data on order of several terabytes a year, and much of this data is collected by NOAA hydrographic survey vessels. In order to make the data easily accessible and available to the public, it is formatted and submitted to the National Center for Environmental Information (NCEI) ocean data archive. Here, the basic principles of library cataloging apply – find the appropriate information quickly and in the location it is supposed to be stored.

To mark the deployment of NOAA ships Fairweather and Rainier as they begin a summer of hydrographic survey projects in the Arctic, NOAA hosted a ceremony at the U.S. Coast Guard (USCG) base in Kodiak, Alaska.
The ceremony opened with a joint USCG and NOAA color guard while the national anthem was sung by retired USCG Chief Aviation Machinist Mate, Joe Symonoski. Rear Admiral Gerd Glang, director of the Office of Coast Survey, gave opening remarks.


“Characteristically, we are quite modest about the missions and accomplishments of our NOAA ships. But today, we are taking the time to recognize the planned deployment of both ships to undertake hydrographic surveys in the U.S. Arctic,” Glang said. “It is important for us because of the renewed investment NOAA is making in this region at a time when the Arctic has become more accessible to marine transportation.”
END_OF_DOCUMENT_TOKEN_TO_BE_REPLACED

June 1 marks the beginning of the 2015 Atlantic hurricane season. Although NOAA projects it to be a below normal season, it doesn’t mean coastal areas will have it easy. In the wake of a hurricane, Coast Survey plays a critical role in NOAA’s response efforts. But what about before the storm? In addition to building relationships and coordinating emergency response capabilities with agencies such as  U.S. Coast Guard, U.S. Army Corps of Engineers, and port authorities, Coast Survey focuses on local community preparedness meetings and outreach events throughout the month of May.
Recently, Coast Survey’s navigation manager for the central Gulf Coast, in partnership with The National Weather Service Lake Charles and the Port of Morgan City, Louisiana, conducted public preparedness forums in Lafayette, Lake Charles, and Morgan City. One meeting featured U.S. Representative Charles W. Boustany, Jr., as the speaker. Approximately 90 people attended, including the congressman’s constituents, and local, state, and federal agencies and responders. The information provided was of vital interest given the upcoming start of hurricane season and the 10th anniversary of hurricanes Katrina and Rita.
END_OF_DOCUMENT_TOKEN_TO_BE_REPLACED