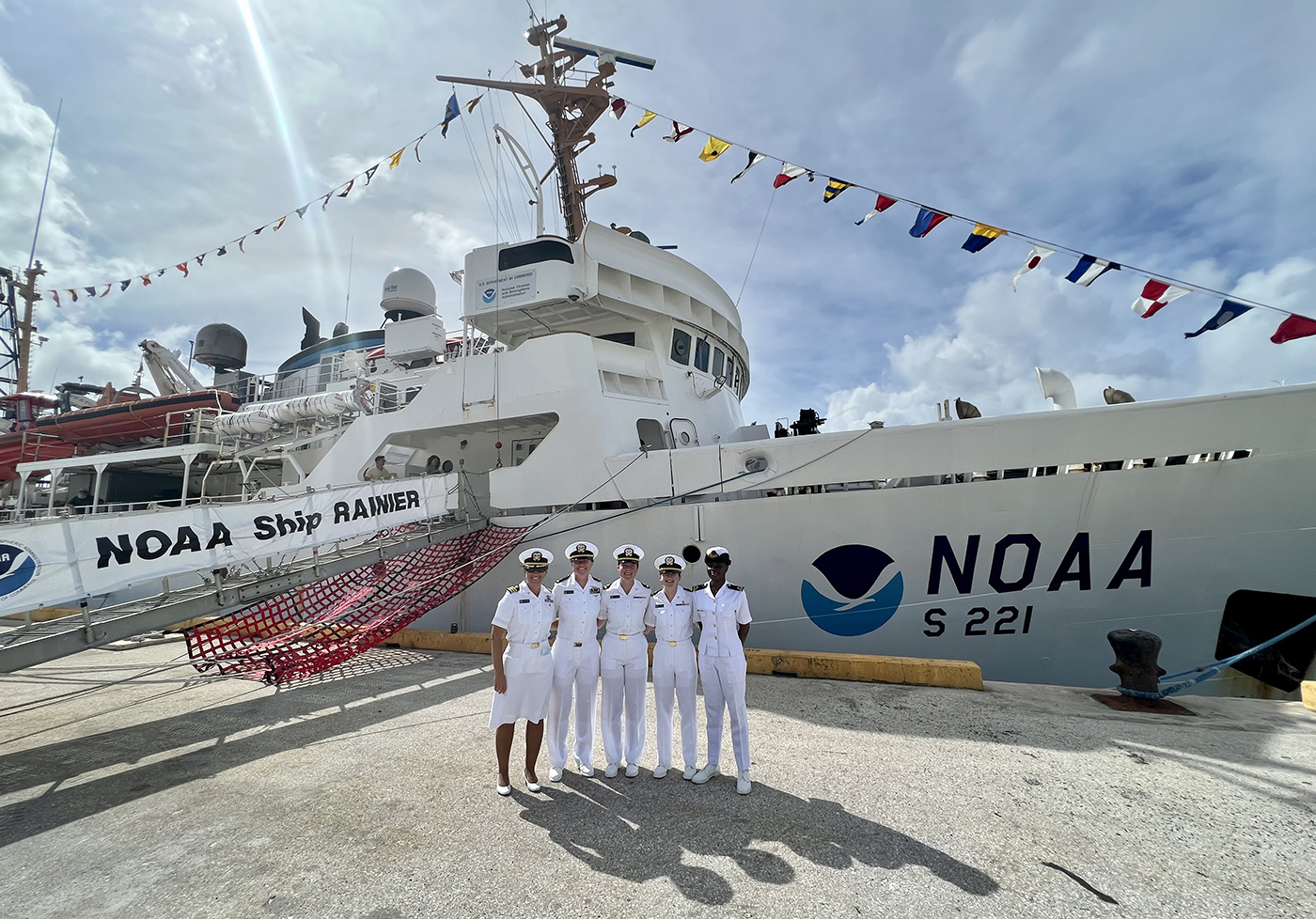 The Empowering Women in Hydrography project is a global effort led by the International Hydrographic Organization and Canada that seeks to initiate, organize, and track a series of activities and initiatives which will enable more women to participate equitably in the field of hydrography and to assume leadership roles within the hydrographic community. NOAA is contributing to the project via an ‘at-sea experience’ on NOAA hydrographic ships for three women each year over the four year lifespan of the project. After a global call for nominations, three women were selected to join NOAA ships for the 2022 survey season. Sub-Lieutenant Mercy Modupe Ogungbamila from the Nigerian Navy joined NOAA Ship Rainier from July 5 to 15, 2022 while surveying from Guam to Saipan.

My nomination for the NOAA Empowering Women in Hydrography at-sea experience has afforded me an educational and indelible experience aboard NOAA Ship Rainier, both underway and at Apra Harbor Guam. The purpose of this at-sea experience is to provide participants with hands-on experience through an immersive opportunity aboard a NOAA hydrographic ship, thereby gaining familiarity with NOAA ships and hydrographic operations, operating commercial hydrographic equipment and software, becoming familiar with NOAA’s Hydrographic Survey Specifications and Deliverables and survey execution thereof, and working within NOAA’s data management processes and procedures. The purpose of this report is to appraise my experience aboard the hydrographic survey ship. However, this report is limited to my experience in respect to what I saw, heard, activities I participated in, and how I felt while aboard.

I embarked the survey ship on the 5 July 2022 and was paired with Ensign Alice Beittel, my sponsor and cabin mate aboard the ship. After boarding, I was given a brief orientation on the ship, familiarizing me with her various departments and public spaces. The orientation also included assigned muster stations during emergencies. My sponsor showed me around the ship and introduced me to the crew members. I was shown the survey department and introduced to the survey technicians.

The at-sea experience entails the hydrographic survey of Guam to Saipan from 5-15 July 2022. However, the ship could not get underway on 5 July as she was missing an engineer and some crew members, so the activity was restricted to Apra Harbor, Guam. For the 2022 survey season, NOAA Ship Rainier is engaged in both diving and hydrographic surveys. Therefore, two diving launches and one launch are deployed for survey and data collection. Each day commences with the operations brief at 0730, to appraise the crew members about the plan of the day. An operational risk assessment form covering resources, environment, team selection, fitness and weather as well as mission complexity is filled out by each team. This is to ascertain the readiness of each team.

On 7 July, a survey team where I participated as a small boat crew member was tasked with the survey of Inner Apra Harbor. The RA-6 is one of the survey launches of NOAA Ship Rainier deployed for surveying nearshore waters such as harbors. The multibeam standardized survey equipment on board the launch are a Kongsberg EM 2040 dual frequency multibeam sonar, HYPACK and HYSWEEP hydrographic data acquisition systems, Differential Global Positioning System receivers, Applanix POS MV attitude and positioning systems, and precision Global Navigation Satellite System receiver stations for position control which are augmented by an assortment of conductivity, temperature, and depth instruments, and bottom samplers. The ship uses the same equipment with the addition of the moving vessel profiler.

The launch deployed for the hydrographic survey of Inner Apra Harbor in Guam. This involves the collection of multibeam swaths of the harbor, re-surveying any inconsistencies, and other areas of importance. A survey plan with proposed polygons was used for data collection in probable straight lines, that is, the launch picks a heading and continues logging data in that direction. Each multibeam swath in the mainscheme has a 20 percent overlap. At the end of data collection, cross line swaths are conducted across the array of traverses to affirm the data collected in the traverse swaths. A conductivity, temperature, and depth (CTD) survey is also carried out at the beginning and end of each mainscheme to confirm the sound velocity from the transducer on the multibeam echo sounder. The values of sound velocity from the multibeam echo sounder and the CTD are compared and the more precise data is logged.

At the end of each day, the data collected for the survey are transferred to a hard drive and processed with software to eliminate erroneous data and fliers. The processing of this data aids in determining survey areas for the next survey. Gaps in coverage and breaks are sought out so the data can be recollected. Furthermore, there is a debrief meeting with the operations department to discuss problems encountered during data collection, anomalies and other data of importance as well as ways the next survey can be improved. Although the diving launches are deployed daily, the hydrographic survey launch team collects data every other day while the following day is for processing data and mapping out missed areas or other areas of interest. I was happy to participate in three survey teams which comprised seasoned survey technicians, scientists, and NOAA Corps officers. This afforded the knowledge of various approaches to the survey as each team was tasked with different areas of Apra Harbor.

Underway from Guam to Saipan

I was so elated when NOAA Ship Rainier was underway to Saipan on 12 July as this is my opportunity to witness the ship conduct surveys while underway. The ship uses a multibeam echo sounder and moving vessel profiler for data collection. To my great surprise, paper charts are not used aboard, instead, electronic navigational charts (ENCs) are used. The navigation of the ship is done using an electronic chart display and information system (ECDIS). I observed how the ENCs can be used effectively without paper charts, and also other various functions of the ECDIS. The ECDIS shows the route of the survey ship and every change made in the course/heading of the ship. The use of ENCs on the ECDIS is possible because the ship has two systems which are installed with separate software, backed up by different power sources so in case one goes off, the other can be used.

The multibeam echo sounder aboard the survey ship has one transducer with an array of pingers that can transmit three different frequencies at the port, center, and starboard concurrently. This is to direct the transmission to three different points thereby improving the quality of data and increasing the coverage area. The multibeam echo sounder is used at an automatic frequency range of 40kHz to 100kHz, for great depths. Furthermore, the moving vessel profiler is used for speed data collection and attached to this is a small torpedo-like structure called a “fish.” The fish is lowered to the seabed (or the extent of the rope) collecting data which is transmitted to a plotter and analyzed by the sound speed manager. This analysis delineates the relationship between water depth, sound speed, temperature and salinity. Although the moving vessel profiler, CTD and Expendable Bathythermograph (XBT) are all used to collect sound speed data. The CTD and moving vessel profiler collect conductivity (salinity), temperature, and depth data whereas the XBT collects temperature data and detects hydrostatic pressure. Also, the XBT is non-recoverable and used underway when the moving vessel profiler cannot be deployed or recovery is not feasible after deployment.

My major observation aboard NOAA Ship Rainier is the number of civilian crew who are in charge of surveys, diving, and engineering while the NOAA Corps officers are in charge of operations and navigation of the ship. The survey team is predominantly made up of civilians who carry out data acquisition and processing before forwarding the data to the Office of Coast Survey’s cartography department.

Also, I observed the cordial relationship between the officers and the civilian crews, all parties are actively engaged in all the activities of the ship. From lowering and recovery of launches, participation in ship drills, and other activities.

Prior to sailing with the ship, I have witnessed navigation of ships being done with paper charts and the ECDIS. Most of the time information is annotated on the chart before being transferred to the ECDIS. I observed that the ship only uses ECDIS, taking advantage of all the functions of the system. This is possible due to the use of two ECDIS with separate software and backup power source.