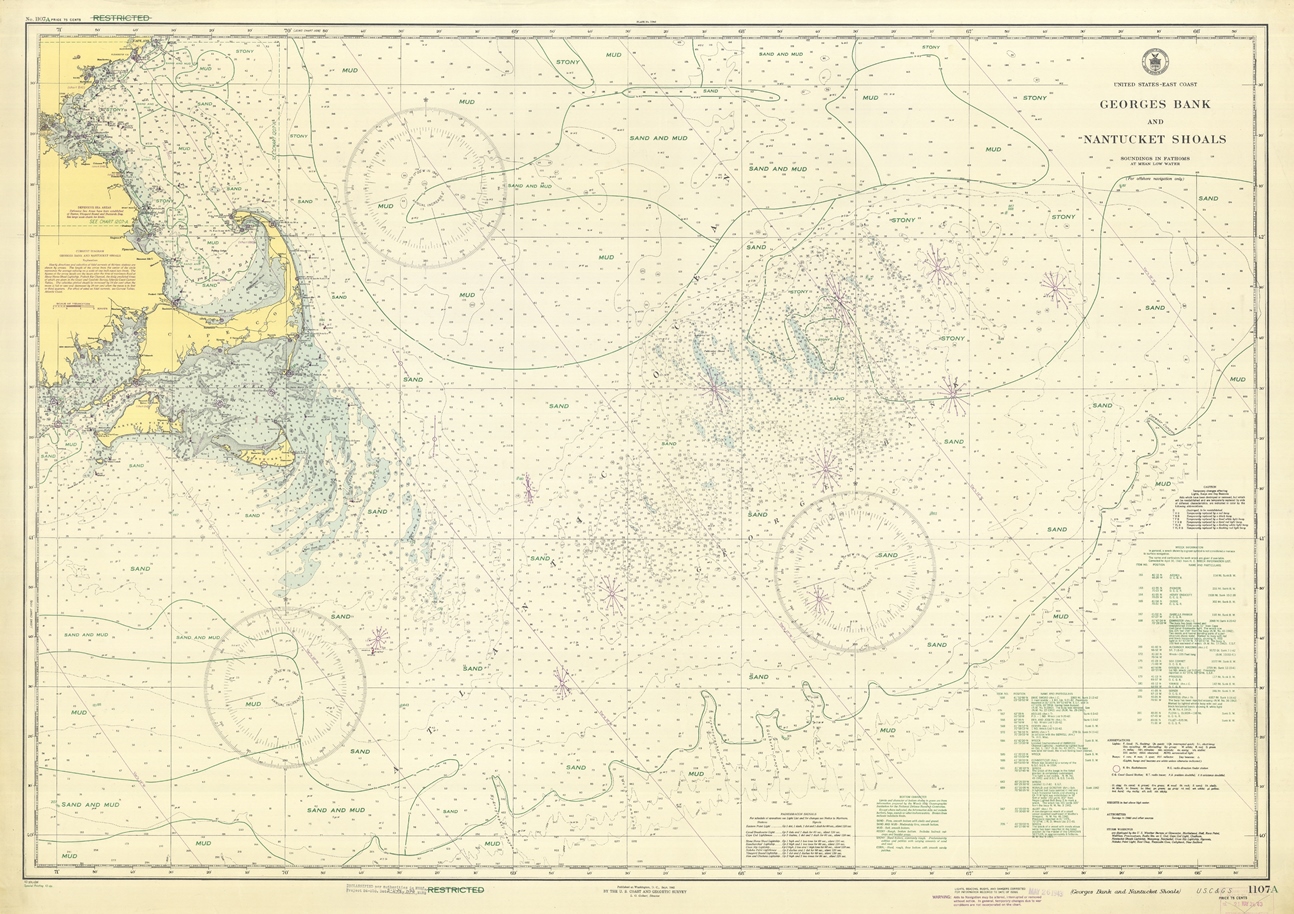 Bear, Mytilus, and Physalia Seamounts were discovered by oceanographers with Woods Hole Oceanographic Institution, and they were named for small Woods Hole vessels that began making forays into the deep sea in the 1950s. The Bureau of Geographical names does not know the origin of the name “Retriever Seamount,” but NOAA historian Skip Theberge thinks it was probably discovered and named for the Cable Repair Ship Retriever, which started service in 1961 working off the East Coast. The canyons were named in the 1930s, for U.S. Coast and Geodetic Survey ships. (C&GS is the earliest NOAA predecessor agency.) Oceanographer Canyon was named for the C&GS Ship Oceanographer, which discovered many canyons incising the continental slope between the Georges Bank area and Cape Hatteras; Gilbert Canyon was named after the C&GS Ship Gilbert, which took an active part in the survey of the Georges Bank, 1930-32; and Lydonia Canyon was named for the C&GS Ship Lydonia.

The monument, which encompasses 4,913 square miles, has been the subject of scientific exploration and discovery since the 1970s. But the original discoveries of the canyons were made more than 80 years ago, when the U.S. Coast and Geodetic Survey surveyed the canyons with TNT bombs.

Yes, you read that right.

Some of the C&GS ships in the 1930s were anchored-station vessels, hanging a hydrophone over the side at a well-determined point. TNT bombs were thrown over the sides at about fifteen minute intervals. The explosion being “time zero,” the sound waves traveled through the water to the hydrophone, which in turn activated an automatic radio signal back to the survey vessel. The time interval between reception of radio signal and time of explosion, times the velocity of sound in sea water, gave the distance. This system, called “radio-acoustic ranging,” was developed by C&GS as the first non-visual survey system.

The survey of these canyons, using (for then) modern methods gave an unprecedented view of the seafloor generating debates as to the cause of the canyons, and in a larger sense, generating the birth of marine geology. Indeed, Dr. Francis Shepard, recognized by many as the “father of marine geology,” got his start on these surveys.

The history of these early explorations is fascinating. So as not to give it short shrift, we are going beyond our normal blog post format and including a full-length article contributed by NOAA’s historian, retired Capt. Skip Theberge.

The recent designation of the Northeast Canyons and Seamounts Marine National Monument is the culmination of over eighty years’ involvement in this area by NOAA and its predecessor agencies. It is no accident that the canyons in this area were named for ships of the U.S. Coast and Geodetic Survey (C&GS), NOAA’s oldest ancestor agency. Oceanographer, Gilbert, and Lydonia Canyons were named for three of the four ships that conducted surveys of the area between the years 1930 and 1932. The fourth ship, Welker, is commemorated by the naming of Welker Canyon, just to the west of the new monument boundaries, and a fifth ship, Hydrographer, was commemorated by the naming of the next canyon to the west of Welker Canyon.  These ships completed the first comprehensive survey of the continental slope in this area, using the most modern equipment available: a combination of advanced echo-sounding equipment and the radio-acoustic ranging system, the first survey-quality non-visual navigation system. This system was developed in the Coast and Geodetic Survey.

Besides being used for navigational charts, the data from these surveys was used in a number of scientific publications, first by Francis Shepard, known as the father of marine geology. Although going on to become a famous Scripps Institution of Oceanography scientist, some of his earliest work was initially published in the Bulletin of the Field Engineers of the Coast and Geodetic Survey. However, the greatest work associated with these surveys was a paper published in 1939 by the geologist A.C. Veatch and the brilliant C&GS officer Lieutenant Paul Smith. This paper was titled “Atlantic Submarine Valleys of the United States and the Congo Submarine Valley” and was Geological Society of America Special Papers Number 7. Included in this paper was a beautiful map that extended from Lydonia Canyon on its northeast corner to Norfolk Canyon off Chesapeake Bay at its southern limit. Shown on this map were thirteen named canyons as well as a number of other canyons incised in the continental shelf.

This map served to call the attention of the geological community to the rugged and grand nature of the seafloor, previously believed by many to be bland and featureless. It also served to ignite a fierce debate in the scientific community regarding the mode of formation of canyons. There were two competing theories. The first theory was that the canyons formed sub-aerially with sea level dropping as much as 10,000 feet worldwide. The second theory was that sediment-laden density currents carved out the canyons. Both theories had influential backers but, ultimately, as a result of Woods Hole Oceanographic Institution (WHOI) sediment sampling in the early 1950s on the oceanic extension of Hudson Canyon, the density current theory won out as layers of poorly graded sands and gravels were found far at sea. This, combined with knowledge of the sequential breaking of further downslope submarine cables over a period of 13 hours following the 1929 earthquake on the Grand Banks, served to prove the concept of density currents.

The Second World War brought new studies in this area as the continental shelf and slopes of the United States were the locus of fierce submarine warfare. Woods Hole Oceanographic Institution and the Coast and Geodetic Survey combined efforts to map the location of known shipwrecks and bottom sediment types on a series of charts extending from east of Georges Bank to the tip of Florida. This was not WHOI’s first work in the area, as Maurice Ewing had conducted early seismic reflection and refraction experiments in this area before the war.

Following the war, WHOI sent numerous expeditions into the Atlantic and discovered three of the seamounts included in the Northeast Canyons and Seamounts National Marine Monument. These three were Bear, Mytilus, and Physalia and were named for small inshore vessels operated by WHOI. Although the earliest mention of these seamounts in the unclassified literature was in 1962, John Ziegler of WHOI first discovered and named these features in 1955 on a classified survey. A prototype Heezen-Tharp physiographic diagram that was probably produced in the mid-1950s clearly shows the New England Seamount Chain and seamounts in the vicinity of the three Woods Hole seamounts of the monument.  The fourth seamount in the monument, Retriever Seamount, was probably discovered by and named for the cable repair ship Retriever which operated off the east coast of the United States in the early 1960s.

Geological discovery and interpretation of the canyons and seamounts dominated research until the late 1960s. At this time, studies began of the dynamic oceanography of Oceanographer and other New England canyons. The first manned submersible dives into the canyon also occurred at this time, with 1966 Alvin dives followed in 1972 and 1974 by dives in the Navy’s nuclear research submersible NR-1. Oceanographer Bruce Heezen was aboard and suggested a “balanced concept in which canyons are created by some tectonic forces or drowned river valleys, are shaped and kept alive by the tides and are coursed by turbidity currents at certain long term intervals when especially large supplies of sediment are delivered to the heads of their system.” In the late 1970s and early ‘80s, there were sporadic efforts to begin studying the biology of the canyon systems, which has continued up to the present day. Since 2000, there has been a significant increase in studies related to these systems. The first dive on a seamount of the new monument was made on July 24, 1968, on Bear Seamount, by K. O. Emery in the submersible Alvin. Minimal information was obtained, but in 1974 a series of dives was made from the vicinity of Corner Seamount to Mytilus Seamount under the direction of James Heirtzler as chief scientist. In his words, this was the first time that “man had directly viewed the expanse of the earth between the Mid-Atlantic Ridge and the North American continent.” Dive 7, the final dive, was made on Mytilus Seamount; it was described as “unique” as it is capped by approximately 300 meters of shallow water reef material. As this occurs at a depth of over 3,000 meters, it is apparent that this seamount has subsided over two miles while being rafted to the northwest from its original location over the Great Meteor hotspot.

Biological studies of these seamounts did not begin in earnest until 2000, when NOAA Ship Delaware II made 20 exploratory trawls in the vicinity of Bear Seamount. Over 270 species were collected including 115 fish species, 26 cephalopod species, and 46 crustacean species. Over the next thirteen years, NOAA’s Office of Ocean Exploration and Research (OER) followed up the fisheries cruise with a number of expeditions to the vicinity of the newly designated national monument. The first of these cruises was the 2003 Mountains in the Sea Expedition which, following in the footsteps of Heirtzler years earlier, used the submersible Alvin to dive on Manning and Kelvin seamounts and conduct multibeam surveys of Bear Seamount. As opposed to the primarily geologic emphasis of the earlier dives, though, these concentrated on the remarkable biological diversity of the New England Seamount Chain. This expedition was followed by Mountains in the Sea 2004, in which the use of robotic vehicles instead of a manned submersible was used to conduct explorations. 2004 saw Retriever, Balanus, and Bear Seamounts explored and the acquisition of hundreds of spectacular photos of the seafloor. 2005 saw the North Atlantic Stepping Stones expedition which, although not studying seamounts in the national monuments, did explore a number of seamounts of the New England Chain. In 2012, NOAA ocean exploration ship Okeanos Explorer returned to the northeast continental shelf and slope area on the Northeast and Mid-Atlantic Canyons mapping expedition. This expedition was primarily concerned with multibeam mapping of the various canyons, including those in the monument, as preparation for the 2013 Northeast U.S. Canyons Expedition that investigated Oceanographer, Lydonia, and Gilbert Canyons, other large canyons of the regions, and Mytilus Seamount. This expedition marked the first use of NOAA’s 6,000 meter-rated remotely operated vehicle, Deep Discoverer and its accompanying Seirios camera sled which enabled telepresence ocean exploration. With this technology, OER was able to provide scientific and public audiences onshore a real-time view of ocean discovery in the grand canyons and hidden mountains of our Atlantic Ocean frontier.

Over eighty years of discovery and exploration, much of it accomplished by NOAA, its predecessor agencies, and academic partners have led to President Obama’s presidential proclamation of the Northeast Canyons and Seamounts Marine National Monument. The monument will assure that the unique ecosystems of this fragile area will be protected for posterity.

1 Reply to “A monumental history”