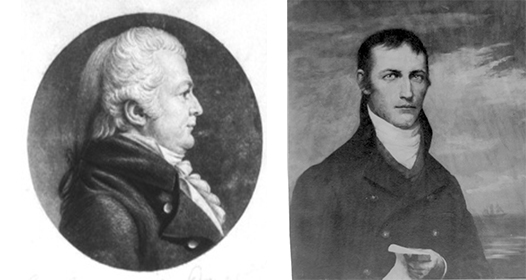 On this date in 1807, President Thomas Jefferson approved an act to provide for surveying the coasts of the United States. NOAA has long honored Jefferson — but what of the legislators who saw the need, wrote the bill, and sent it to the president?

On December 15, 1806, Samuel W. Dana (CT) introduced a resolution instructing the House of Representatives’ Committee of Commerce and Manufactures to “inquire into the expediency of making provision for a survey of the coasts of the United States, designating the several islands, with the shoals and roads, or places of anchorage, within twenty leagues of any part of the shores of the United States.” Dana was joined in debate by Jacob Crowninshield (MA-2), the chair of the Committee of Commerce and Manufactures.

The contemporary report of the House debate gives us some understanding of the act’s provisions. (From the History of Congress, H. of R., pages 151 and 152)

Mr. Dana, of Connecticut. – In 1802, an act was passed, authorizing a survey of Long Island Sound. In pursuance of that act, the Secretary of the Treasury caused a survey to be taken by two men, who appear to have been, what the act intended, intelligent and proper persons. And there has since been published a chart of the Sound, handsomely executed, on a large scale, which must, I presume, be regarded as convenient and valuable by those concerned in that branch of navigation.

At the last session of Congress, an act was passed for another survey. It made provision for surveying the coast of North Carolina between Cape Hatteras and Cape Fear, with the shoals lying off or between those capes. I understand that measures have been taken for executing this act, but that the vessel employed in the service, and all the papers respecting the survey which had been made, had been lost near Ocracoke Inlet, in one of the desolating storms experienced on the coast in the course of the present year.

The surveys, which have thus been authorized, were perhaps of the most urgent necessity; but other surveys of the coast are desirable. What has already been done may be regarded as introductory to a general survey of the coasts of the United States under authority of the Government. With a correct chart of every part of the coast, our seamen would no longer be under the necessity of relying on the imperfect or erroneous accounts given of our coast by foreign navigators. I hope the lives of our seamen, the interest of our merchants, and the benefits to the revenue, will be regarded as affording ample compensation for making a complete survey of the coasts of the United States, at the public expense.

The information which may be obtained will also be useful in designating portions of territorial sea to be regarded as the maritime precincts of the United States, within which, of course, the navigation ought to be free from the belligerent searches and seizures.

It is proposed to extend the survey to the distance of twenty leagues from the shore. This distance is mentioned with a view to the second article of the treaty with Great Britain in 1783, which describes our boundaries as “comprehending all islands within twenty leagues of any part of the shores of the United States.”

The resolution, which I propose for the consideration of the House, is expressed in these words:

Resolved, That the Committee of Commerce and Manufactures be instructed to inquire into the expediency of making provision for a survey of the coasts of the United States, designating the several islands, with the shoals and roads or places of anchorage within twenty leagues of any part of the shores of the United States.

Mr. Crowninshield, of Massachusetts, was very glad to see the resolution offered, but he should like it better if it were more extensive. He believed there were many shoals on the coast lying at more than twenty leagues distance from the shore. Among others, St. George’s Bank was at more than this distance. He wished that the resolution might be varied so as to comprehend all the shoals on the coast, from St. Croix to the southern extreme of Louisiana.

Mr. C. had always thought it important that an accurate survey should be made of our coast. Holland’s chart, though the best, is very inaccurate.

Mr. Dana accorded with the chairman of the Committee of Commerce and Manufactures (Mr. Crowninshield) in respect to the utility of an accurate survey of the shoal which he had mentioned, but was against altering the resolution so as to include any islands at a greater distance than twenty leagues from the shore. The treaty of 1773 (sic) authorizes us to consider islands within that distance as appertaining to the territory of the United States. There is, therefore, peculiar propriety in extending the proposed survey to the distance of twenty leagues along the whole of our coast. If any shoals at a greater distance from shore are to be surveyed, special provision for this purpose may be made in the details of a bill which the committee may report. It would be more convenient to specify the details in a bill than in a general resolution for inquiry.

Mr. Crowninshield then moved to strike out twenty and insert fifty in the resolution. He was confident that there were shoals lying more than twenty leagues distant from the shore, and he thought it important to have them surveyed. It might be that there are no islands beyond that distance. He was not certain in regard to them, but he was sure that there were extensive shoals.

Mr. Dana suggested that the gentleman (Mr. Crowninshield) might designate, by way of amendment, particular shoals which he wished to be surveyed.

Mr. Cook, of Massachusetts, doubted whether all of St. George’s Bank was within even fifty leagues of the shore. If it were in order, he would move to strike out twenty and insert seventy.

A division of the question on striking out twenty and inserting fifty was called for.

Mr. Crowninshield at length withdrew his motion, and it was agreed that the resolution should lie on the table.

Dana’s resolution was referred to Crowninshield’s committee the next day and, on January 6, 1807, the committee introduced H.R. 21, authorizing and requesting President Jefferson to “cause a survey to be taken of the coasts of the United States.” After some amendments, the House passed the bill on January 20, and sent it to the Senate. The Senate also had some amendments, which the House concurred with. Both Congressional chambers approved the final bill on February 9, and the bill was “laid before the President of the United States.”

Be it enacted &c., That the President of the United States shall be, and he is hereby, authorized and requested to cause a survey to be taken of the coasts of the Untied States, in which shall be designated the islands and shoals, with the roads or places of anchorage, within twenty leagues of any part of the shores of the United States; and also the respective courses and distances between the principal capes, or head lands, together with such other matters as he may deem proper for completing an accurate chart of every part of the coasts within the extent aforesaid.

Sec. 2. And be it further enacted, That it shall be lawful for the President of the United States to cause such examinations and observations to be made, with respect to St. George’s bank, and any other bank or shoal and the sounding and currents beyond the distance aforesaid to the Gulf Stream, as in his opinion may be especially subservient to the commercial interests of the United States.

Sec. 3. And be it further enacted, That the President of the United States shall be, and he is hereby authorized and requested, for any of the purposes aforesaid, to cause proper and intelligent persons to be employed, and also such of the public vessels in actual service, as he may judge expedient, and to give such instructions for regulating their conduct as to him may appear proper, according to the tenor of this act.

Sec. 4. And be it further enacted, That for carrying this act into effect there shall be, and hereby is appropriated, a sum not exceeding fifty thousand dollars, to be paid out of any money in the Treasury, not otherwise appropriated.