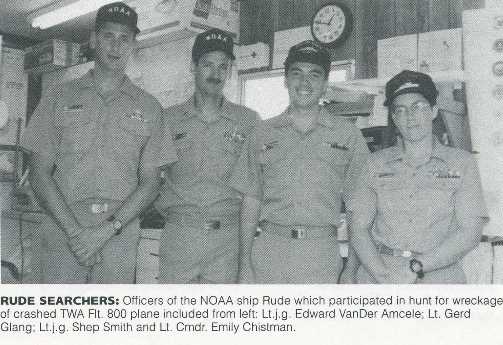 On this date in 1996, twenty years ago, the crew of NOAA Ship Rude completed her special mission and headed back to regular survey duties. Throughout the previous two weeks, Rude’s officers and crew were pivotal in finding the wreckage of – and helping to bring closure to – one of the worst aviation disasters in U.S. history.
From a 1996 report by then-Cmdr. Nick Perugini, NOAA’s Office of Coast Survey, we have this description:

“When TWA Flight 800 exploded out of the sky this summer, NOAA hydrographic survey vessel Rude began a dramatic journey which would test to the limit skills and resources of its officers and crew, and bring to national attention the agency’s hydrographic capabilities.

“Rude was the second U.S. government rescue vessel to arrive at the scene and contributed information critical to the subsequent recovery effort and ensuing investigation…
“The day after the TWA crash, President Clinton pledged all resources the federal government could bring to bear to determine why a Boeing 747 fell out of the sky in a blazing fireball, killing all 230 aboard. By that time, Rude was already on the crash site, eight miles off the coast of Moriches Bay, Long Island. Reports over the marine radio of a plane crash in that area prompted Cmdr. [Sam] DeBow to contact the Coast Guard and offer assistance.
“The Coast Guard directed Rude to the crash site immediately. The ship steamed all night and arrived on site about 7:00 a.m.
“Rude immediately began assisting in the search… Rude’s people knew what had to be done. The job entailed running a series of systematic side scan sonar lines over an area in search of a feature who position was approximate… DeBow and his crew felt that no vessel or group of people were better qualified to meet the task.”


The narrative of the crew’s actions over the next two weeks is fascinating. GPS World has given us permission to post their extensive article from February 1997, “Sounding the Depths: Mapping the Wreckage of TWA Flight 800.” It’s well worth a read, to follow along as Rude makes the initial discovery of the debris field, and then works to works to document hundreds of contacts, guiding divers as they retrieve bodies and pieces of the jetliner. As Jim Hall, chairman of the National Transportation Safety Board, said after the event: “Accurate mapping of the wreckage on the ocean floor was essential… The sonargrams provided by the Rude proved invaluable to the recovery effort.”

The dedication of the crew, the smart use of technology, the long hours of processing data and interpreting it – it’s awe-inspiring. But something else touches the heart about this operation. The Los Angeles Times, on July 24, 1996, headlined an article, “11-year-old inspires searchers.”
Times staff writer James Gerstenzang reported from aboard Rude, off Long Island: “In a picture taped to a blue metal case that houses sophisticated navigational equipment on this ship, 11-year-old Larkyn Lynn Dwyer smiles broadly, her dimples deep and her bangs hanging almost into her eyes.

“’This is what we’re here for, guys,’ Cmdr. Sam DeBow, skipper of this 90-foot hydrographic survey ship, told his crew Tuesday as he posted the picture on the case that houses the vessel’s global positioning system, which can pinpoint its location within a few feet on a featureless sea.
“As the ship plows the Atlantic water in the recovery zone where TWA Flight 800 crashed in flames last Wednesday, Larkyn Lynn, who was the aboard the airplane bound for Paris, has come to personify the 230 victims for the vessel’s 11-member crew.
“’I have a daughter that age. That’s what really hit home for us,’ said DeBow.”
Rude’s crew was honored for their heroic work in the tragedy’s aftermath. In a speech at a ceremony honoring the critical contributions to search and recovery efforts, U.S. Secretary of Transportation Frederico Pena said, “As horrible as this ordeal has been for all of you, it has reminded our nation of two simple truths.
“We’re reminded, first, that America always pulls together in times of need. Everyone out there was part of the team… Whatever problems arose, people stepped in to solve them – together. For that, the President and I are proud, and the nation is grateful.
“Second, we’re reminded that our nation’s heroes are not just famous names. Our nation’s heroes are ordinary people, called on to do the extraordinary. As you searched the sea, making yourselves special to the families of the loved ones, you made yourselves special to America. You moved our spirit. Everyone in the country knows of your heroics. And they thank you.” 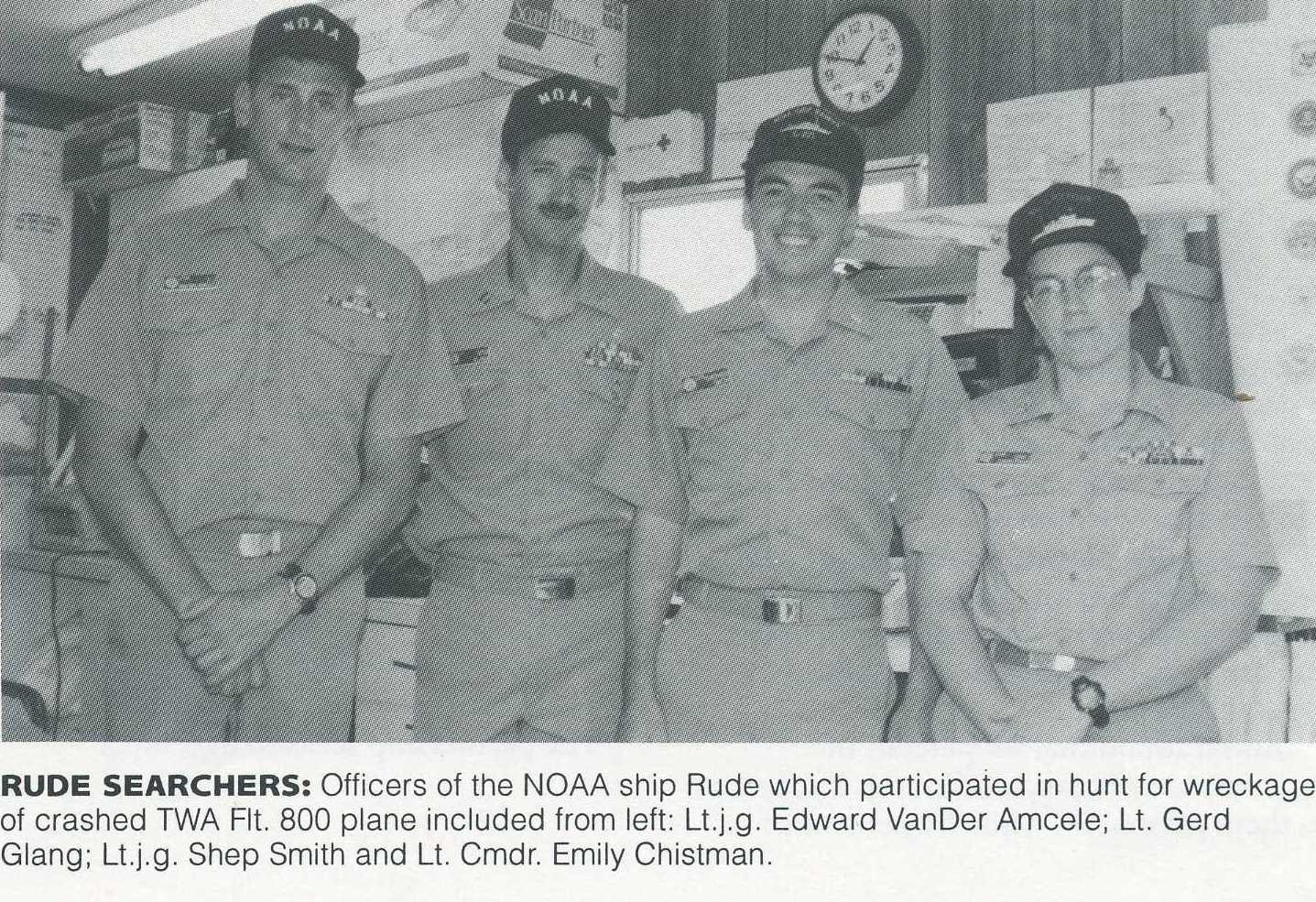