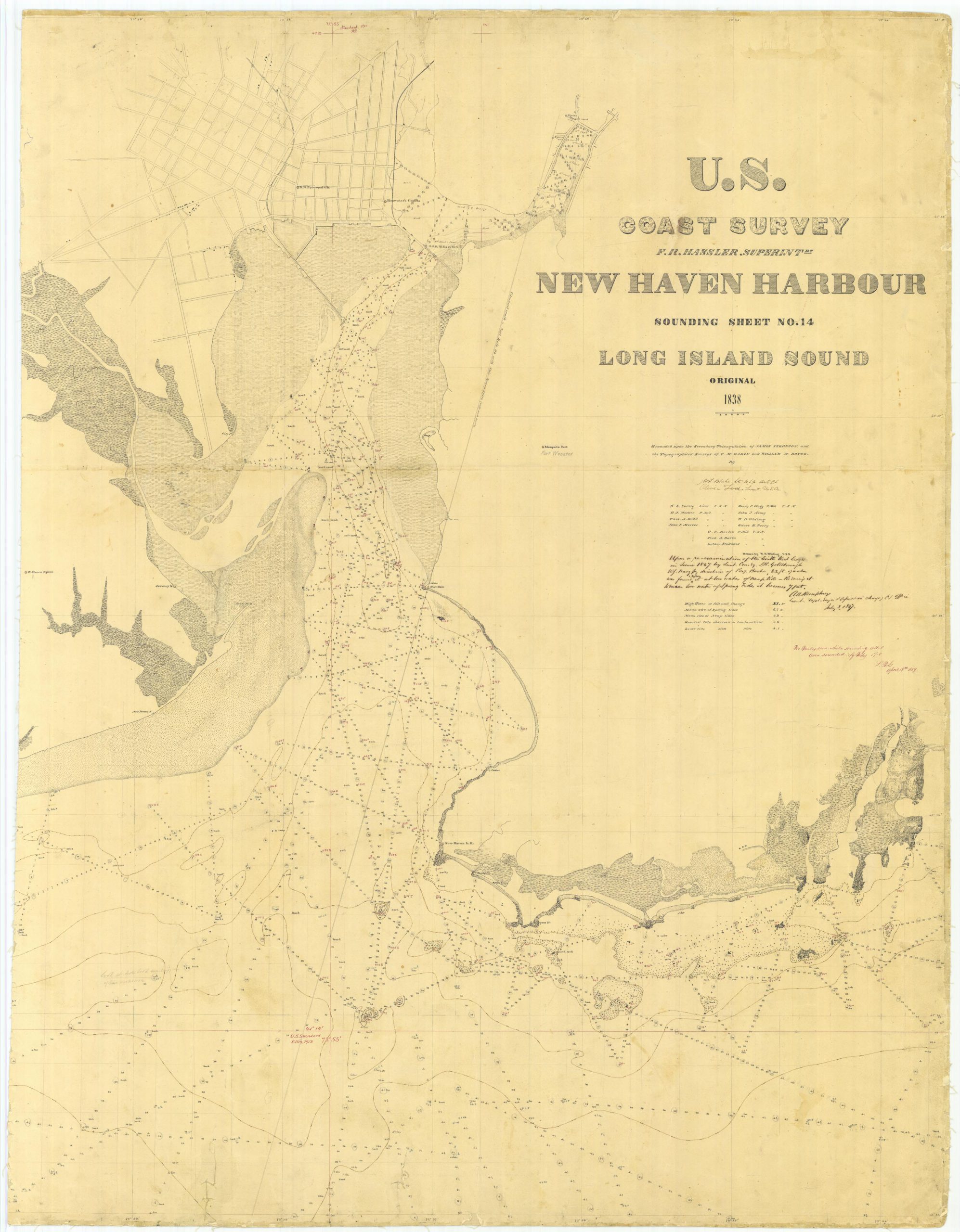 Yesterday I was looking for some historic Chesapeake Bay T sheets [topography drafts]…  Anyway, down in the bottom of a folder, there was a zipped file, dated 2009, never unzipped. I thought: well, since I have noticed this now, why don’t I unzip it? It turned out to be two overly rescaled jpgs, but using my Keith Bridge tricks [a technique developed by a former Coast Survey historical chart expert] I found the two full-scale originals. It was one chart, with a small part cut off to make two separate files: the original 1838 hydrography for New Haven Harbour!

This is the basis for the 1838 engraved chart for Congress, the second published Coast Survey chart. (The first was based on Lt. Gedney’s partial survey of Newark Bay, NJ and the mouth of the Hackensack River, 1837.) The New Haven work was 1838. In 1839, the same Lt. Gedney and company captured the slave ship Amistad and brought the ship and captives to New Haven, claiming the escaped slaves as property. [UPDATE, 10/27/2016: Delving deeper into Gedney’s actions, it turns out he docked the ship in New London, while the captive Africans were brought to New Haven.] Then later, John Quincy Adams persuaded a judge they had freed themselves on the boat and were no longer slaves.
Unzipping the files happened within an hour or so of getting an email from Michelle Zacks, a scholar of marine environmental history who has explored historic Coast Survey field survey notebooks as sources for her ongoing project on the antebellum oyster industry and the lives of enslaved and free African Americans in the Chesapeake region. That research helped lead to her new job, as the associate director of the Gilder Lehrman Center for the Study of Slavery, Resistance, and Abolition, at Yale, which is in: New Haven!
It all happened just like that!  Like the chart “wanted” to emerge back into the Amistad story.


We weren’t able to trace the origination of that zip file, but it was obviously created by someone who didn’t realize the value of the historical images. And this, ladies and gentlemen, is why we value historians.