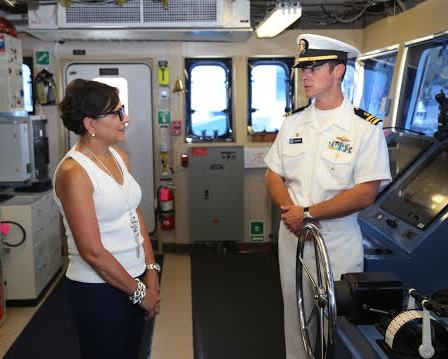 Sec. Pritzker’s remarks highlighted Hassler’s contributions since its commissioning just over four years ago, including its completion of 46 hydrographic surveys and the ship’s contribution to re-opening East Coast sea traffic after Hurricane Sandy. She also reminded the officers and crew of the legacy they honor in their contributions to our nation’s coastal intelligence.

“On this day in 1807, President Thomas Jefferson approved the plan of a mathematics professor at West Point to conduct a survey of our new nation’s coastlines. That professor was Ferdinand Rudolph Hassler. He would go on to become the first superintendent of the Coast Survey – a position he held until the day he died.

“His commitment to our coasts continues today through your service. Whether it is assessing damage after a hurricane or discovering new insights submerged deeply along our coastlines, our country is better off thanks to the commitment of the men and women who serve on this remarkable ship.

“Ferdinand Hassler’s legacy of exploration and scientific discovery will continue on under the capable leadership of Lieutenant Commander Jaskoski, just as it has under Lieutenant Commander Welton. To all of you, the men and women who chart the uncharted while protecting lives, property, and the environment: thank you for your service.”

Captain Eric Berkowitz, chief of Coast Survey’s Hydrographic Surveys Division, also offered appreciation for the leadership provided by Secretary Pritzker, and for the dedication of Hassler’s officers and crew. We share his comments here:

Thank you, Lt. Cmdr. Kuzirian. Good afternoon to you all. On behalf of NOAA’s Office of Coast Survey, and our director, Rear Admiral Gerd Glang, I thank you for the warm welcome extended to the officers and crew of NOAA Ship Ferdinand R. Hassler.

I’d especially like to thank Secretary Pritzker for her strong leadership at the Department of Commerce. Secretary Pritzker developed the “Open for Business Agenda,” a bold strategic plan and policy blueprint that focuses on expanding trade and investment. It seeks to unleash more government data for economic benefit – something that NOAA and our survey ships do for all of the maritime industry. We appreciate your vision and backing of NOAA’s survey and charting mission.

Today I want to offer some remarks on why this ship is so important to the goals of the Department of Commerce, and how Hassler’s personnel meet these goals by carrying on the legacy of the ship’s scientific namesake, Ferdinand R. Hassler.

As the first superintendent of the U.S. Coast Survey, in the 19th century, Ferdinand Hassler did more than survey the coast. He was a scientific pioneer who elevated the status of science in government and American society. He developed a thriving organization of mathematicians, geodesists, topographers, hydrographers, instrument-makers, engravers, and printers who worked in concert to create our nation’s nautical charts. As the leader of the federal government’s first scientific agency, he set the government’s foundation for acquiring and using data.

In approaching his mission, the survey of the coast, Hassler imbued the U.S. Coast Survey with unswerving devotion to accuracy, precision, and scientific integrity. These values continue to define NOAA’s navigation services to this day.

NOAA Ship Hassler’s mission is no less important than her namesake’s mission was in 1807. Thomas Jefferson asked for the survey of the coast to ensure the safety of maritime commerce. We ask the same of Hassler today.

This vessel is one of four dedicated NOAA survey ships that acquire the data to produce the nautical charts that are the foundation of our nation’s marine transportation system. Every ship has its own character, and every commander has their own challenges, but the commanders of NOAA’s hydrographic survey ships have astoundingly high bars to reach in what we demand of them.

I know that sometimes it seems the bar keeps getting raised higher, just out of reach. It’s not your imagination. Hassler’s crew and officers have faced some difficult hurdles in bringing this relatively new ship into its full potential. During these last couple of years, first as the executive officer and now as the commanding officer, Lieutenant Commander Welton’s leadership has been truly noteworthy.

The writer William Arthur Ward once said: “The pessimist complains about the wind; the optimist expects it to change; the realist adjusts the sails.” You have constantly adjusted the sails.

It has also been said that what you do has far greater impact than what you say. Lt. Cmdr. Welton, you have, as the commanding officer, successfully dealt with multiple drydock and dockside repair periods over the course of your command. As we all know, a ship and her crew are meant to be at sea. Being alongside or in extended repair periods can be some of the most challenging times for any command. You did not complain; instead, you remained focused on the long-term health of the ship and her crew to set her up for future success and we thank you for this.

We have been lucky to have Lt. Cmdr. Briana Welton as the commanding officer of Hassler. We are lucky again with Lt. Cmdr. Matt Jaskoski as the new CO. We welcome Lt. Cmdr. Welton as she moves to her new position as the chief of Coast Survey’s Atlantic Hydrographic Branch, and we give our promise of support to Lt. Cmdr. Jaskoski as he assumes command of Hassler. You both have some challenging times ahead, as you will throughout your careers.

But, since it is the set of the sails, not the direction of the wind that determines which way we will go, we have great confidence that we will all reach the destinations charted by your leadership.