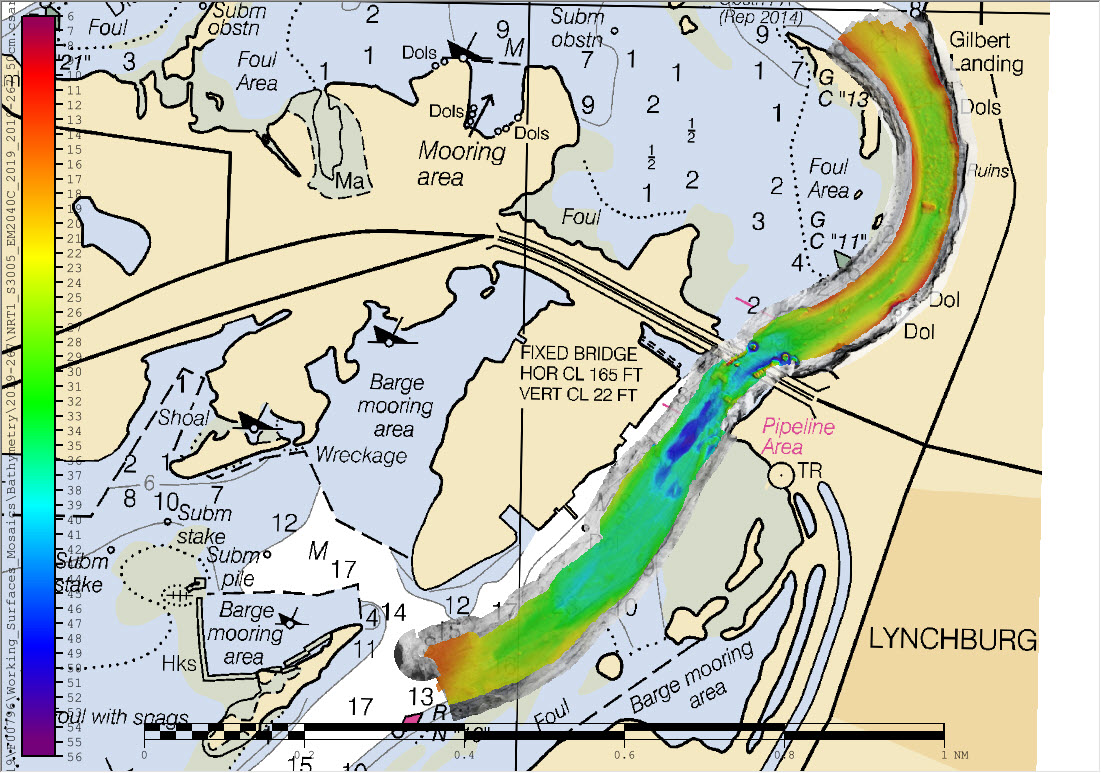 While many are aware that hurricanes can inflict costly damage when they make landfall, tropical storms and depressions are not to be underestimated. Tropical Depression Imelda moved over the Texas coast in mid-September producing heavy rain and causing extensive flooding. Nine barges broke free from their mooring on the San Jacinto River and two of these barges hit the Interstate 10 bridge in Lynchburg, Texas. At the request of the U.S. Coast Guard Captain of the Port Houston-Galveston, NOAA’s Navigation Response Team (NRT)- Stennis was called in for rapid hydrographic survey response.

The Lynchburg section of the San Jacinto River is a heavily-used mooring area for barges and tugs making their way in and out of the Houston Ship Channel. The I-10 bridge is the main eastern thoroughfare for commuters into Houston. After the bridge was hit, it was shut down to vessel and commuter traffic, causing heavy congestion on the alternate highway routes and holding up shipping from the north side of the bridge.

NRT-Stennis collected 200% side scan sonar coverage and full multibeam echo sounder object detection on the north and south sides of the bridge, scanning for debris in the channel. The 200% coverage provides the highest confidence level in identifying significant features and dangers to navigation.

Assessments of the damage showed that the dolphins — man-made marine structures often used for mooring boats — on the north side of the bridge, and the wooden supports and guards defining the channel under the western side of the bridge, suffered severe damage.

After the channel was surveyed and the damage assessed, the Captain of the Port established a safety zone, allowing vessel traffic to transit the area with restrictions. Authorities also partially reopened the bridge for commuter vehicle traffic.

NOAA’s navigation response teams conduct hydrographic surveys to update NOAA’s suite of nautical charts. The teams are strategically located around the country and remain on call to respond to emergencies speeding the resumption of shipping after storms, and protecting life and property from underwater dangers to navigation.