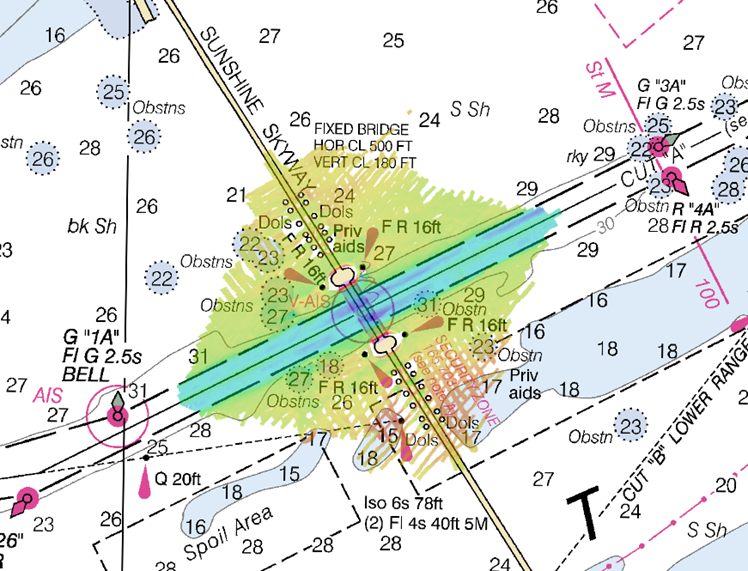 NOAA’s navigation response team 2 (NRT2), homeported in Fernandina Beach, Florida, conducted a survey around the Sunshine Skyway Bridge, which spans Tampa Bay. The U.S. Coast Guard (USCG) and additional members of the Tampa Bay Harbor Safety Committee requested the work and expressed interest in establishing alternate routes for recreational boating traffic. Alternative routes will alleviate increasing congestion where the main ship channel passes beneath the bridge. This area is naturally restrictive to navigation and, as a result, there have been multiple accidents and near accidents here in the past.


Lt. j.g. Patrick Debroisse from NOAA Research Vessel Bay Hydro II installed a topographic lidar system on NRT2, which marked the first time a lidar system was employed from an NRT boat. The lidar system enabled 3D data to be collected for those portions of the bridge that are above water line. NRT2 collected lidar data for associated bridge protective structures and two fixed light range towers in addition to the bridge and bridge supports.
The accurate positional and dimensional information gleaned from this data will be used to compliment extensive hydrographic sonar data collected beneath the surface. Together, the complete data set will enable full consideration of area features, both above and below the water line, in determining the placement of alternative routes.

A USCG approval decision is anticipated in the spring. If approved, the chief of the cartographic team will work to have the alternate routes added to all affected NOAA charts.
The NRT2 team consists of James Kirkpatrick (team lead), Lucas Blass, and Howie Meyers. NOAA’s NRTs operate trailer-able survey launches to provide time-sensitive information during emergency response and maritime incidents such as vessel groundings, sinkings, or cargo loss. The launches are equipped with multibeam and side scan sonar, which can help identify navigation hazards and mitigate risk to life and property.
The largest scale raster navigational charts of this area, charts 11415 and 11416, are available online.