In preparation for the M/V TERN’s anticipated arrival this week in San Francisco Bay, the Coast Guard and Port of San Francisco asked Coast Survey for a bathymetric survey of the proposed anchorage site. TERN is a semi-submersible vessel with a 60-foot draft, and the proposed anchorage site has charted depths of 62 feet and 63 feet ‒ leaving no room for error, to say the least. The question was whether there are any spots shoaler than 62 feet.
This isn’t your everyday anchorage.

“This vessel floods ballast tanks and partially sinks, putting the main deck below water. Items can then be floated onto the ship, and then water is pumped out of the ballast tanks to bring the main deck back above water level,” explains Lt. Michael Davidson, chief of Coast Survey’s Navigation Response Branch. “TERN won’t actually be anchoring in the anchorage, but rather will be held in place with tugs while cranes are transferred. When she submerges during the operation, her submerged depth is 60 feet.”
Coast Survey assigned Navigation Response Team 6 to investigate the depths with its multibeam echo sounder, to ensure that the TERN will have the under keel clearance she needs. Last week, as requested by the Coast Guard, NRT 6 conducted an investigative survey around Whiskey 2, Anchorage 9. (Whiskey 2, depicted on the survey chart as W2, is a “bucket” that resides within Anchorage 9. A bucket is where they usually park a ship.) Of the many small, pocked features, the team found six that exhibit a height above bottom. Most notable of these features is a 60’ shoalest sounding near a 63’ charted depth – near the location where TERN was supposed to submerge.

After the Coast Guard received the team’s report of obstructions, they asked Coast Survey to investigate an additional area. They were looking for a spot that was at least 62′ deep, free of any features.
“In our area of survey near W1, there were no features that exhibited a height above bottom or showed any significant scour,” reports Ian Colvert, acting team lead of Coast Survey’s Navigation Response Team 6. “The area near W1 is a much more promising place to park the TERN, versus W2 which had a few features and depths not as deep.”
Coast Survey has a proud 200-year history of protecting ships from accidents. NRT6 gives us a very real example of how that mission continues today. 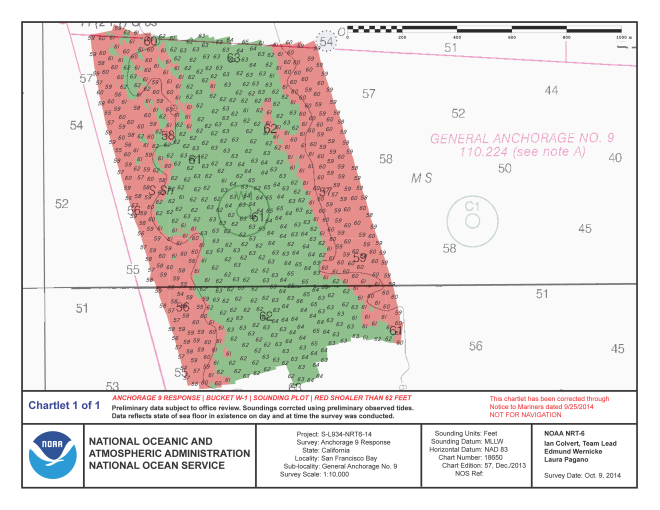