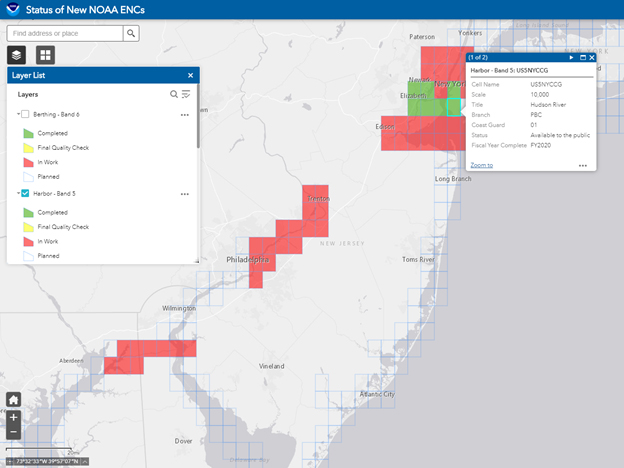 NOAA’s Office of Coast Survey released a new and improved map viewer featuring the status of NOAA electronic navigational charts (NOAA ENC®) as they undergo major improvements. The data is also available as a GIS map service. The public can now view ENC project status from the planning and creation stages all the way to completion, keeping them better informed when these enhanced navigational charts become available.

The current ENC scheme is based on the extents of the paper nautical charts from which ENCs were originally digitized. Improvements to the ENC suite involves replacing this puzzle-piece layout with a rectangular grid of ENCs (referred to as rescheming), often providing larger scale and more detailed coverage than the existing paper charts. This process was first announced in the National Charting Plan and is explained in detail in Transforming the NOAA ENC®.

The map viewer shows where new ENC cells are planned (in open blue rectangles), cells actively being created (in red), cells undergoing final quality checks at IC-ENC (in yellow), and completed cells released to the public (in green). The time it takes to create individual ENCs varies, depending on its scale, the area which it covers, and other factors. Once it enters the quality check (yellow) phase, it generally only takes a few more weeks to be released to the public.

Individual ENCs are categorized into six usage bands, which correspond to traditional chart usage types (or scale ranges) from the smallest scale “overview” (band 1) to the most detailed, largest scale “berthing” (band 6). To see the progress, turn on each ENC usage band one at a time from the Layer List on the left side of the display. Click on a cell on the map to get more information about a specific ENC.

The map viewer shows that work started on the Alaskan North Slope, the Great Lakes, the Florida Gulf Coast, and Down East Maine. Two reschemed band 2 (general scale) ENC cells already exist over the Arctic Ocean. New band 4 cells (approach scale) are now available in Western Alaska, Western Lake Superior, and the Hudson River and Lake Champlain in New York and Vermont. Band 5 ENC coverage (harbor scale) is also being created for the Chesapeake and Delaware Canal and the Delaware River from Philadelphia to Trenton, as well as New York City and environs.

The multi-year ENC project will significantly improve ENC coverage as cells are reschemed from their old puzzle piece shapes into the new, regular grid. Enhancements include standardizing scales within each usage band to improve edge matching between adjacent ENC cells and recompiling depth areas into integer metric units, usually at a denser contour interval.