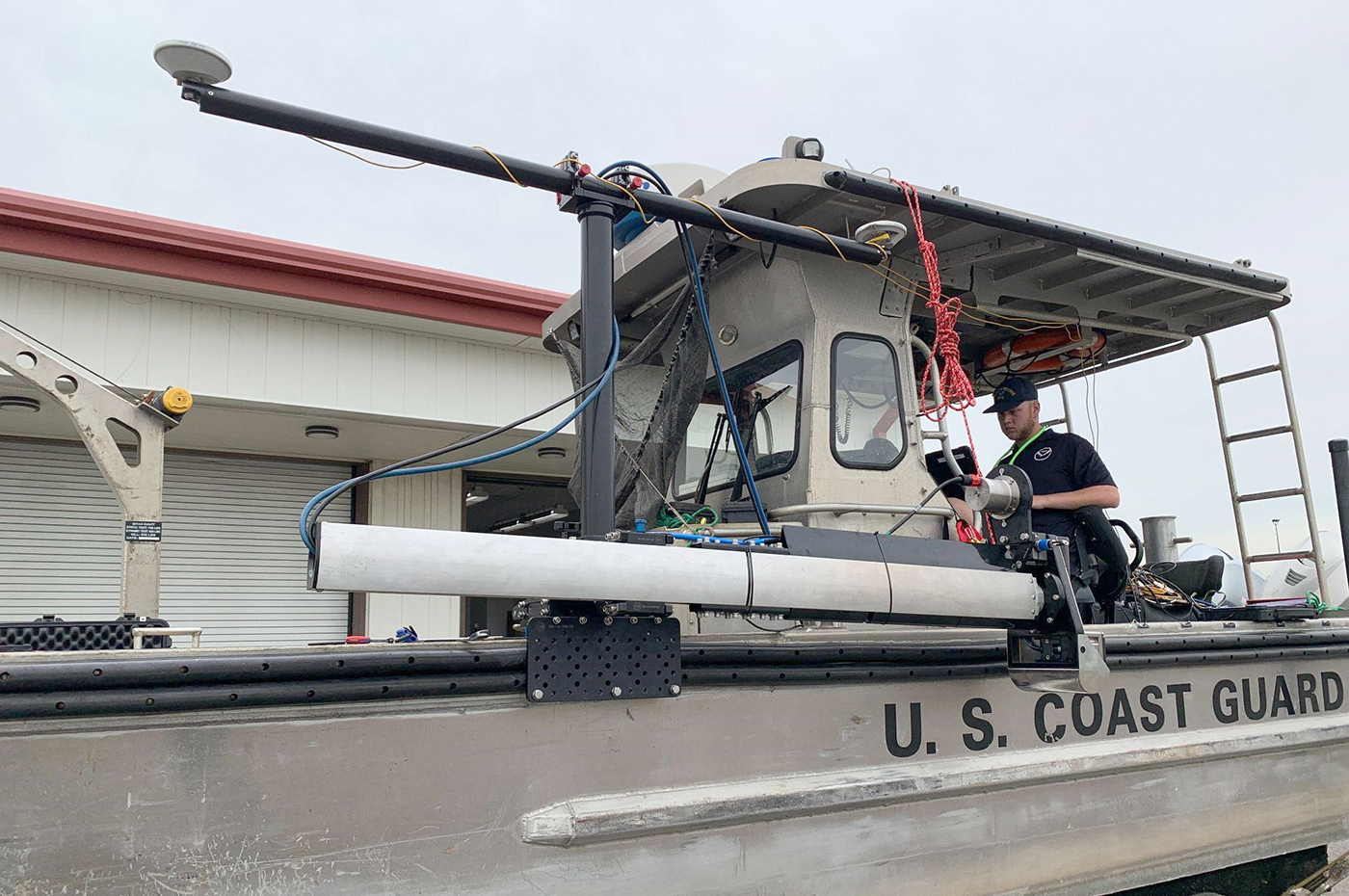 The U.S. Coast Guard made multiple attempts to locate and recover the sunken buoy in the days following the strike. When these attempts proved unsuccessful, they contacted NOAA’s Northeast Navigation Manager Colleen Roche for assistance, who then mobilized an NRB team. Physical Science Technician Michael Bloom and Lt. j.g. Nick Azzopardi of Navigation Response Team-New London, were joined by NRB Technical Advisor Mike Annis to deploy the Mobile Integrated Survey Team (MIST) kit on a 26-foot USCG aids to navigation boat out of Bayonne, New Jersey.

Within days of receiving the request, the team arrived at the headquarters of the USCG Aids to Navigation Team New York in Bayonne, New Jersey, and immediately began to assemble the MIST kit on the boat. The kit consists of a number of equipment cases containing everything needed to conduct a full hydrographic survey using a vessel of opportunity. Included in the comprehensive kit is a universal sonar mount with multiple configurations available to utilize a wide array of vessels. The survey equipment consists of a Reson T20P multibeam echo sounder, Applanix inertial measurement unit and POS M/V positioning system, an Edgetech 4125 side scan sonar, sound speed sensors, and the computers and processing units necessary to run the included equipment. For this survey, the team configured the kit for a multibeam bathymetric survey in order to search for the buoy and ensure that the channel was safe for navigation.

After completing setup on the boat, the team transited up the East River to Flushing Bay, where they collected multibeam bathymetry data in the vicinity of the buoy strike. A number of possible objects appeared in the data throughout the day, but these yielded no definitive results. Once the team returned to shore and reviewed the post-processed data, it became apparent why the USCG was not able to locate the buoy. The data showed a distinct scour in the muddy floor leading from the buoys’ original location to a submerged object. About 50 feet from that was another object, roughly the height of the missing buoy and standing nearly vertical from the bottom of the bay.

The data appeared to show that the vessel had dragged the buoy and its’ anchor block for approximately 600 feet before finally sinking. Charted depths in the vicinity of the sunken buoy were 8.2 meters, or 27 feet. The buoy stood approximately nine feet off the floor, creating the potential for a deep-draft vessel strike—likely fuel barge traffic bound for the LaGuardia fuel pier. The team relayed this information to the USCG, who distributed a broadcast notice to mariners, notifying vessels in the area about the potential hazard to navigation. The buoy was then removed from the channel three days later by Coast Guard Cutter Katherine Walker, clearing the Flushing Bay entrance channel of the obstruction.