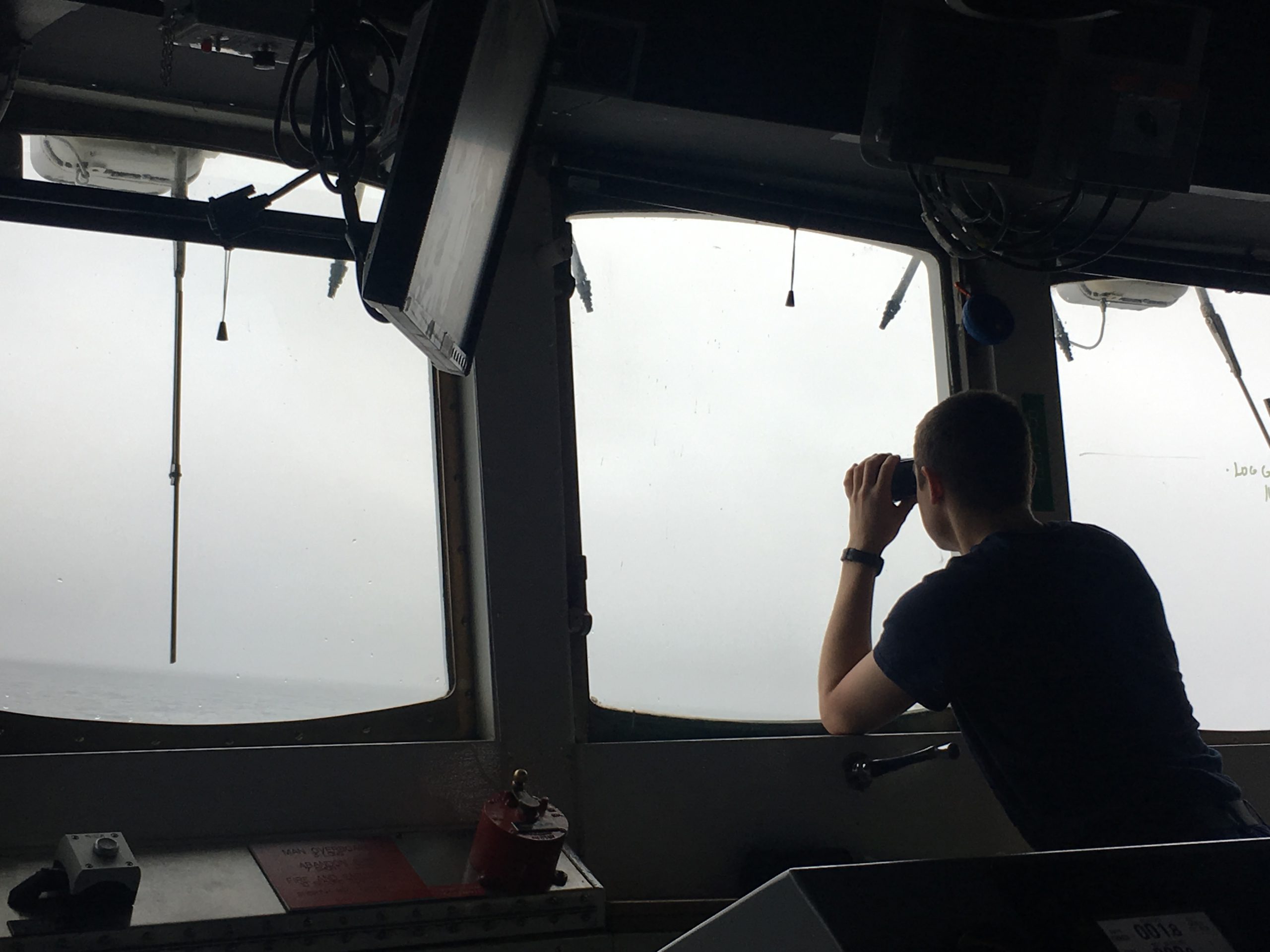 Collecting bathymetric data for our nation’s nautical charts requires skilled work on the water. Whether survey data is actively being collected or the ship is transiting to its next destination, NOAA crews perform a number of ancillary tasks as they operate NOAA hydrographic ships 24 hours a day, 7 days a week. Atmospheric and ecological observations provide context for the crew so they can avoid dangerous situations, while also supporting NOAA environmental databases and records. Drills and training are necessary to keep people and property safe. The following are some of the actions the mariners take while they are aboard the vessel.

1. Emergency drills – The crew regularly practices fire, man overboard, and abandon ship scenarios. Each drill is taken very seriously. For example, smoke and fog machines add realism to the fire drills. Each crew member has an assigned role to carry out for each type of emergency, and someone takes notes about the effectiveness of the first responders, firefighters, medical group, and central communications team. Following the drill, the executive officer of the ship leads a debrief so that the crew can receive feedback and discuss areas of improvement.

2. Position – While in motion, it is vital to know where the ship is, what direction it is heading, and where it will be moving next. To accomplish this, the team on the bridge takes position measurements every 15 minutes near landmasses and 30 minutes further from land. There are three ways to determine the position of the ship – using the Global Positioning System (GPS), using radar, or triangulating the position using an alidade (compass) to collect the bearings of landmarks. The measurements serve as a check for the ship’s GPS reading. In addition, the crew attends regular navigational meetings where the navigation officer shows the intended ship path and discusses any points to note such as narrow passageways, heavy traffic areas, and upcoming weather forecasts.

3. Watches – There is always someone on watch when a ship is transiting or surveying. To supplement the information collected by radar, the lookout uses binoculars to detect debris, other ships, shallow areas, and marine wildlife. If necessary, the crew adjusts the course of the ship to avoid entangling equipment or harming the ship or wildlife. In addition, daily observations of marine mammals are reported to the NOAA National Marine Fisheries Service.

4. Training – Training helps the crew keep their navigation and emergency response skills sharp. Medical persons in charge (MPICs) act as the medical first responders on the ship and receive training on CPR, giving shots, and medical emergency protocols. They also attend informational sessions on topics of interest such as diabetes and transmitted diseases.

The navigation team practices skills like docking and undocking the ship, maneuvering in tight spaces, and lowering and raising launch boats. These drills are important ways for junior NOAA Corps officers to gain operational skills. To help new officers learn the basics, the executive officer of NOAA Ship Fairweather designed a video game where a person can issue commands to teammates who control the bow thrusters, engines, and rudders of an imaginary ship. The game has several challenging levels where players can practice their communication skills while getting a sense of how the boat might respond while docking, turning, or moving in rough environmental conditions.

5. Environmental conditions – The crew keeps track of the air pressure to detect upcoming storm systems. They observe and record cloud type and cover, wave and swell height and direction, and temperature. These measurements are recorded every hour while the ship is moving and are reported to the NOAA National Weather Service every four hours.

The information and training the crew obtains are vital pieces of the research vessel’s operation. By collecting environmental data and honing their skills, the crew ensures they safely navigate U.S. waters and perform their mission.