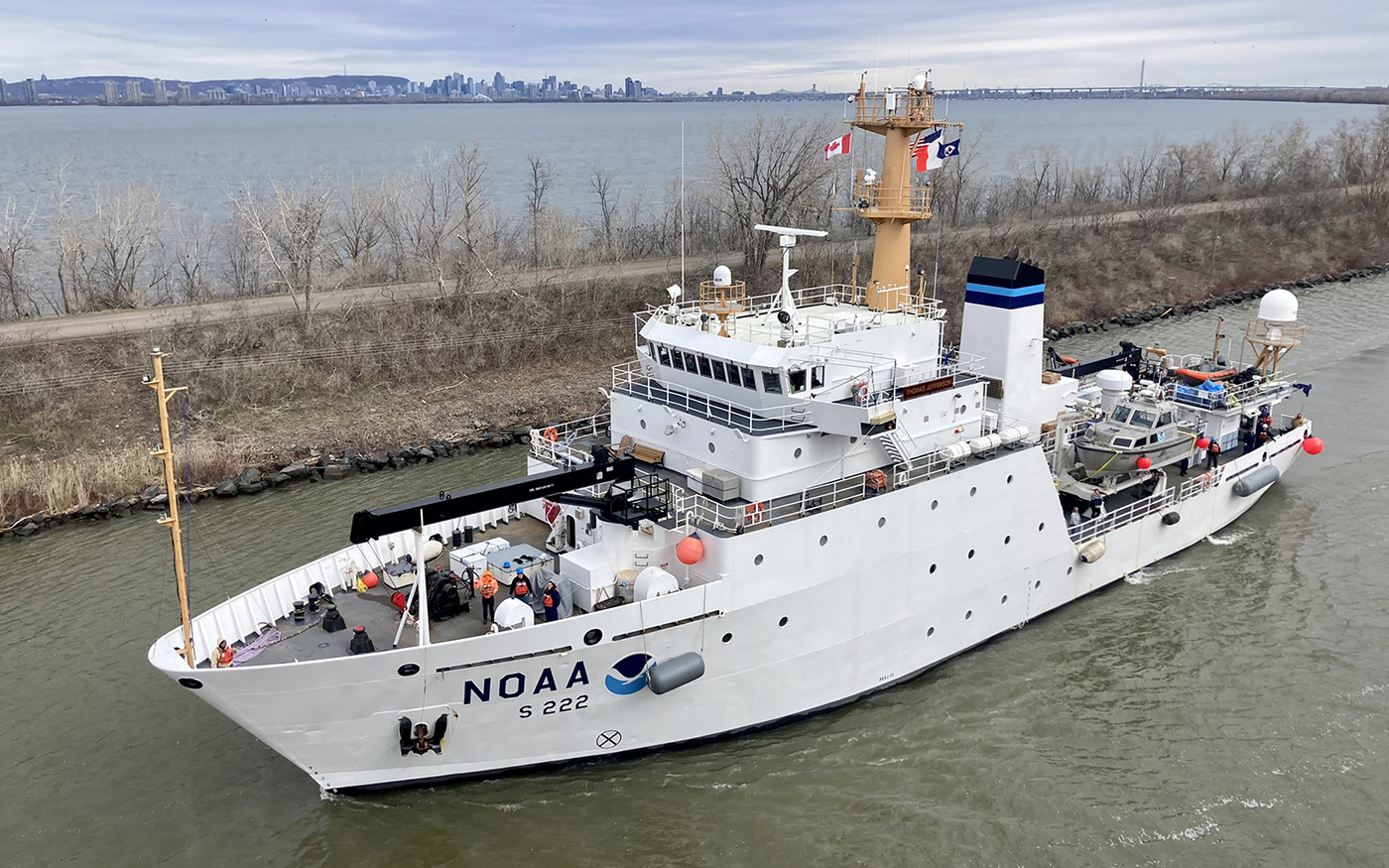 In 2022, NOAA and NOAA contractors will survey U.S. coastal waters and beyond, including multiple missions in the Great Lakes. As the volume, value and size of marine vessels in U.S. waters continues to grow, it is essential that NOAA increase the accuracy and frequency of surveys. A great amount of data on nautical charts of the Great Lakes is more than 50 years old, and only about 5 to 15 percent of the Great Lakes are mapped to modern standards using remote sensing methods such as light detection and ranging and sound navigation and ranging.

This year, NOAA’s Office of Coast Survey and National Ocean Service scientists will be conducting multiple hydrographic mapping missions in the Great Lakes aboard NOAA Ship Thomas Jefferson. These missions, along with the navigation response teams and contracted assets, will support critical updates to marine navigation products and services, and provide modern data to the scientific and benthic mapping communities.

The Great Lakes system includes Lakes Ontario, Erie, Huron, Michigan and Superior, their connecting waters and the St. Lawrence River. The system is an economically important and ecologically sensitive region, and is one of the largest concentrations of fresh water on the Earth. It carries billions of dollars of cargo to and from the Atlantic, has about 10,000 miles of coastline, hosts a $7 billion fishing industry, and heavily influences the climate in the region. NOAA begins the 2022 field season at the tail end of April and will operate throughout late spring and the summer months, wrapping up in late September.

Transit to the Great Lakes

In early April, Thomas Jefferson and her crew left the marine operations center in Norfolk, Virginia and began the trek northward towards the St. Lawrence Seaway and the Great Lakes. After departing the Virginia Capes, the ship headed towards Cape Cod for a quick one-day survey at Pollock Rip Shoal, off eastern Cape Cod. From here, they made a quick stop in Provincetown Harbor, at the northern tip of Cape Cod, and then crossed the Gulf of Maine, transiting south of Nova Scotia and Cape Breton Island before entering the Gulf of Saint Lawrence via Cabot Strait. The ship then made for the St. Lawrence River, laying a course between Îles de la Madeleine and Prince Edward Island. Once inside the river, the next objective was Montreal, Quebec and a quick layover for a seaway inspection before transiting the Montreal-Lake Ontario Section of the seaway, consisting of seven locks. The ship continued on into and across Lake Ontario and prepared to make its way through the Welland Canal which consisted of eight more locks rising nearly 100 meters. After leaving the canal, they finally arrived in Lake Erie and headed towards Cleveland, Ohio. A grand total of about 2,200 nautical miles, and a total lift of about 570 feet above sea level.

Western Lake Michigan – This project is located in Western Lake Michigan, within the Wisconsin Shipwreck Coast National Marine Sanctuary. Previous charting efforts within the proposed 680 square nautical mile project extent were of lead line and singlebeam echo sounders from the mid-twentieth century. The area has never before been surveyed using multibeam echosounder systems.

Cleveland, Ohio – This project will provide modern bathymetric data for the Cleveland area as well as the vicinity of South Bass Island and Presque Isle. Conducting a modern bathymetric survey in this area will identify hazards and changes to the seafloor, provide critical data for updating NOAA’s nautical charting products, and improve maritime safety.

In addition to high resolution bathymetric surveys, the Cleveland project will include operational testing of an uncrewed surface vehicle. The ship also plans to acquire data to support a proposed sanctuary, Lake Ontario National Marine Sanctuary in the vicinity of Oswego, New York.

Homeported in Norfolk, Virginia, NOAA Ship Thomas Jefferson is operated, managed and maintained by NOAA’s Office of Marine and Aviation Operations, which is composed of civilians and officers with the NOAA Corps, one of the nation’s eight uniformed services.