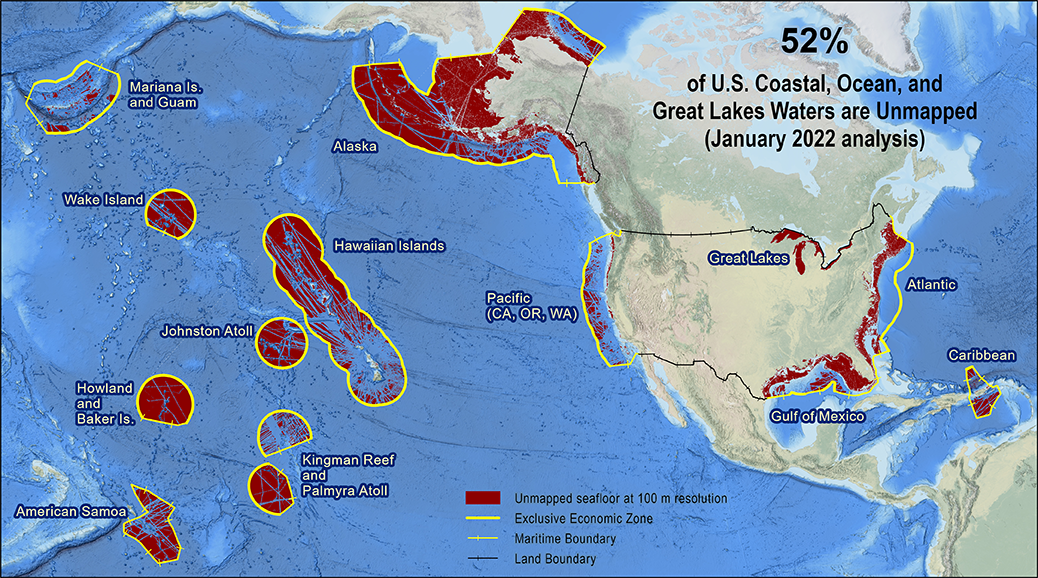 The Interagency Working Group on Ocean and Coastal Mapping (IWG-OCM) has released the third annual report on the progress made in mapping U.S. ocean, coastal, and Great Lakes waters. Knowledge of the depth, shape, and composition of the seafloor has far-reaching benefits, including safer navigation, hazard mitigation for coastal resilience, preservation of marine habitats and heritage, and a deeper understanding of natural resources for sustainable ocean economies. The 2020 National Strategy for Mapping, Exploring, and Characterizing the United States Exclusive Economic Zone and the global Seabed 2030 initiative make comprehensive ocean mapping a priority for the coming decade. The Unmapped U.S. Waters report tracks progress toward these important goals.

Pulling from an analysis of publicly available bathymetry, the report presents the percentage of unmapped U.S. waters by region and shows our progress towards filling these basic bathymetry data gaps with each passing year. At the end of 2021, the latest analysis yielded a 1.5% gain, equal to 58,100 square nautical miles of new bathymetric data coverage since the last report.

About half of these gains can be attributed to new bathymetric data that were added to the archives of the National Centers for Environmental Information for the Alaska and Pacific Remote Islands and Hawaii regions, particularly along the Aleutian Trench and around the Commonwealth of the Northern Mariana Islands, respectively. This past year focused attention on the Alaska region with the formation of Seascape Alaska, a new regional mapping campaign.

“This report is an important marker for us to track progress. We deeply appreciate the surveying and data sharing efforts by government, private sector, philanthropic, and academic institutions which continue to push us toward our goals. That said, with only eight years left until 2030, it’s becoming clear that we need to do more than leverage existing resources. We need to think about the whole package – existing data, new acquisitions, new resources, new technologies – to make a much bigger dent in our annual mapping production.”
—Rear Adm. Benjamin Evans, director of NOAA’s Office of Coast Survey

Percent of U.S. waters that remain unmapped as of January 2022:

Multibeam and lidar surveys are the two primary sources of bathymetry needed to fill these gaps. In support of the integrated ocean and coastal mapping goal to “map once, use many times,” all of the data collected in this effort are publicly available to benefit numerous users. For the latest status on these efforts and how you can contribute, visit https://iocm.noaa.gov/seabed-2030-status.html.