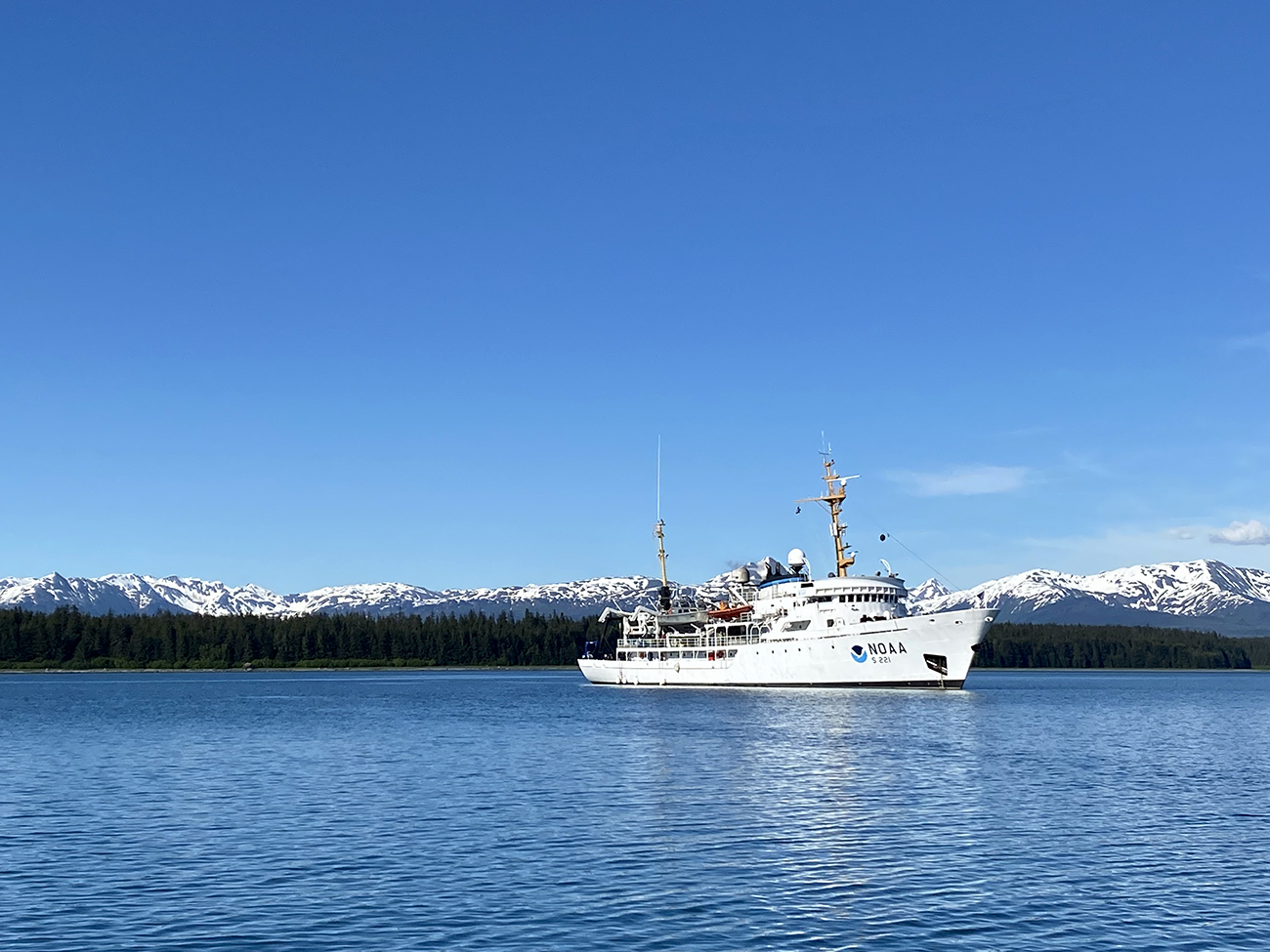 Throughout the spring and summer of 2021, NOAA Ship Rainier surveyed numerous bays and inlets of Alaska’s Glacier Bay National Park and Preserve. As one of the largest national wilderness systems and a United Nations designated World Heritage Site, Glacier Bay National Park includes over 2.7 million acres of marine, terrestrial, and freshwater ecosystems. This dynamic landscape is a living example of a never-ending cycle of geological and ecological change and adaptation. With up to 20-foot tide ranges, seasonal migrations of humpback whales and salmon, and glaciers in flux, the resilient ecosystem attracts millions of visitors each year. This year, Rainier surveyed the Beardslee Islands, Geikie Inlet, Berg Bay, Muir Inlet, Bartlett Cove, Pleasant Island, Taylor Bay, and Dundas Bay. Each survey area revealing several changes in seafloor bathymetry and bottom type. High-resolution seafloor bathymetry will be used to update nautical charts for safe navigation and serve as baseline data to support further research of this culturally and ecologically significant marine environment.

The hydrographic survey history of Glacier Bay National Park runs deep. Throughout the past century, NOAA vessels and the predecessor to NOAA, the U.S. Coast and Geodetic Survey (USCGS), frequented the area to track the evolution of seafloor topography and glacial extents. In 1901 USCGS Assistant J.F. Pratt led the first survey of Taylor Bay and North Inian Pass and compiled information about tides and soundings into a handwritten descriptive report and charts. Several survey crews returned to the region in the following years, plowing through ice to set up tide stations, benchmarks, and survey lines.

The ecologically significant area quickly gained political attention. In 1925 the first upper portions of Glacier Bay became a national monument and 14 years later in 1939 the southern portions, including the Beardslee Islands, were quickly added to the monument. The new extensions called for additional surveys to better navigate and understand the wilderness. The USCGS crew aboard the S/V Westdahl sprung into action that same year and conducted the first hydrographic survey of the Beardslee Islands. Standard survey methods at this time included: survey lines created by sextant fixes, hand deployed lead lines, wire drag surveys, and the Dorsey Fathometer No 3. Westdahl created a smooth sheet that provided the first navigational product of the Beardslee Islands containing depth soundings, seafloor substrates, and increased shoreline accuracy. The survey crew of Westdahl reported evidence of the complex seafloor environment, “In general, it may be said that the navigator should never approach any of these reefs and ledges without local knowledge because glaciation has made the whole locality a weird mass of contradictions.” To learn more about the progression of Beardslee Island Glacier Bay nautical charts over the last century, check out the National Park Service’s blog post.

The impact of glaciation on the submarine environment continues to play a large role in changes seen in nautical charts to this day. As glaciers retreat, newly exposed land rises in elevation as the quantity and distribution of glacial ice weight changes. Likewise when glaciers grow, land underneath the growing ice compresses. With high resolution bathymetric data, researchers will be able to track this isostatic adjustment and monitor the ecological and geological impacts within the park.

During the field season, Rainier identified several new dangers to navigation throughout the park and surveyed just over 87 square nautical miles. Using EM2040 Kongsberg sonars to acquire seafloor depths, vertical datum modeling, and highly accurate satellite positioning, the data from this year’s work will be used to update nautical charts. The most prominent changes identified in Glacier Bay bathymetry this year include shallowing near the heads of glacier-carved inlets and several shoals throughout the Beardslee Islands.

While we may not use hand-tossed lead lines to the frequency that Chief of Party Benjamin H. Rigg and his crew aboard Westdahl used in 1938, the sharp attention to detail acquired in the smooth sheets serves as an important resource when surveying with modern multibeam sonar technologies. Hydrographers on Rainier compare current charts with the smooth sheets when preparing for a survey and during real time data acquisition to safely identify and approach changes on the seafloor. One example is where hydrographers found a shoal that is roughly six feet shallower than originally charted in the smooth sheet.

A striking example of larger landscape changes was capturing unsurveyed seabed in McBride Inlet where McBride Glacier retreated over two nautical miles upslope since the last chart update. With local knowledge provided by Glacier Bay tour vessel, Alaska Hunter, a Rainier survey launch was able to follow the vessel through safe water into the uncharted area to complete the survey and develop a navigationally significant reef. Capturing differences like these can serve as an important tool for further scientific investigation on the causes of seafloor changes. Between post-glacial rebound, sediment accumulation, sea level rise, new plants inhabiting exposed land, and dynamic tidal changes, there are many local and global factors that can play a role in shaping the seabed topography of Glacier Bay.

In addition to further refining nautical charts, bathymetric data acquired by NOAA survey vessels is available for public use on NOAA’s National Centers for Environmental Information Bathymetric Data Viewer and can provide information relevant to tracking differences in seafloor characteristics, sea level rise, and sedimentation. The powerful forces of change are always active in Glacier Bay National Park. Future surveys will continue to provide information about this dynamic and exciting landscape.