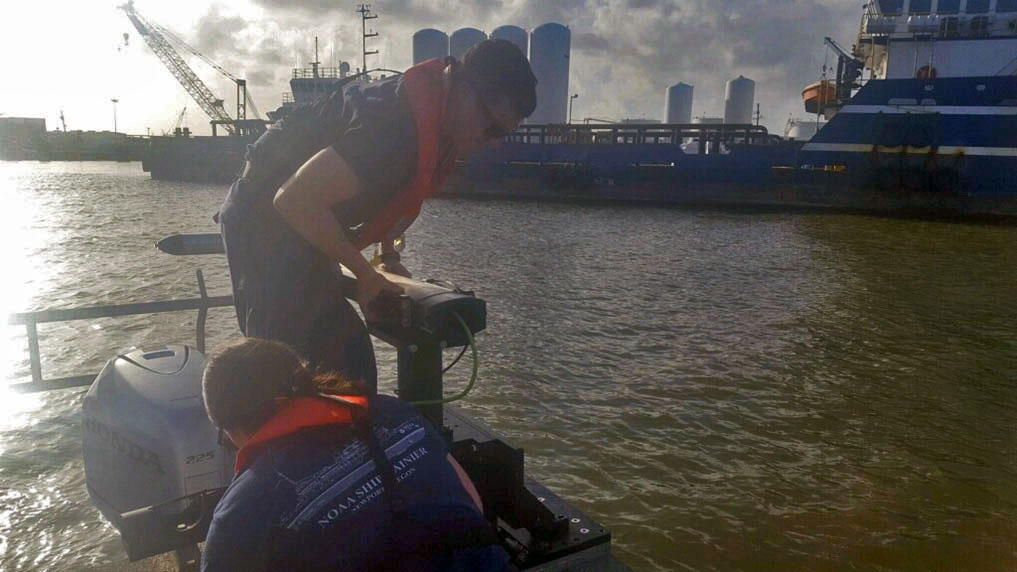 Seven tropical cyclones in the Atlantic Ocean have been named Barry, with the first storm making landfall in 1983. In 2019, Hurricane Barry reached Category 1 status on July 13, becoming the first hurricane of the 2019 season.

Located at the Stennis Space Center, Miss., NRT-Stennis’ Joshua Bergeron and Lt. j.g. Collin Walker prepared the boat, survey equipment, and vehicles as soon as Barry reached the Gulf of Mexico on July 10. Conveniently located in coastal areas around  the United States, NRT’s are able to quickly respond to navigation threats.

By the time the system developed from a tropical storm to a hurricane, members of Coast Survey’s Navigation Response Branch traveled to Gulfport, Miss., to support survey operations. The team included Michael Bloom from NRT-New London, Lt. j.g. Patrick Lawler from Bay Hydro II, and Lt. j.g. Michelle Levano from NRT-Seattle. From there, the team deployed along with NRT-Stennis’ 34-foot survey boat to Port Fourchon. Managing storm surge and localized flooding, the team began surveying on July 15.

As potential dangers to navigation were identified, investigated, and dismissed, the team then shifted their efforts to data collection to charting specifications, utilizing NRT-Stennis’ side scan and multibeam systems onboard. Due to freshwater inflow, tidal storm surge, and tides, the team collected a great deal of sound speed casts. Sound speed casts measure the speed of sound through the water, enabling the equipment and team to know the depth of water to verify their system measurements.

On July 19, after 100 linear nautical miles of survey, the team packed up and headed to Gulfport to fly back to their respective homeports. NRT-Stennis will process and submit the data to update Port Fourchon nautical charts.

NRT-Stennis and its augmenters thank Tim Osborn and David Breach of Port Fourchon for mooring and fuel support during the team’s operations.